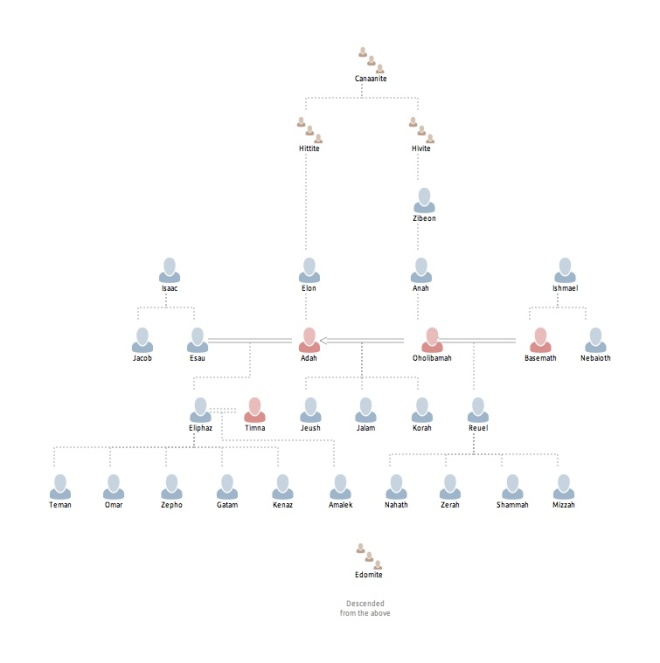 Back in Genesis 27 Isaac gave Esau a blessing that stated:

39“Your dwelling will be
away from the earth’s richness,
away from the dew of heaven above.
40 You will live by the sword
and you will serve your brother.
But when you grow restless,
you will throw his yoke
from off your neck.” (NIV)

And this passage shows that this is exactly what happened.  This passage shows that God was keeping His promises.  Even though Lot, Ismael and Esau were not part of the promised line, their descendants multiplied.  Also, Esau’s descendants moved away from the land, while Jacob’s (born in Padan-Aram) moved into the land.  Esau’s line developed kings long before Jacob’s did.

Mark 7 illustrates once again how the Jewish religious leaders took little things and made them extremely important, and difficult.  The issue in vv. 1-5 is that they criticized Jesus’ disciples for not washing their hands before they ate.  Now, likely your parents taught you to wash your hands before eating.  But this isn’t for health reasons, but for ritual (religious) reasons.

For these ceremonial washings, special stone vessels of water were kept, because ordinary water might be unclean.  To wash your hands in this special way, you started by taking at least enough of this water to fill one and one-half egg shells.  Then, you poured the water over your hands, starting at the fingers and running down towards your wrist.  Then you cleansed each palm by rubbing the fist of the other hand into it.  Then you poured water over your hands again, this time from the wrist towards the fingers.

A really strict Jew would do this not only before the meal, but also between each course.

The rabbis were deadly serious about this.  They said that bread eaten with unwashed hands was no better than excrement.  One rabbi who once failed to perform the ritual washing was excommunicated.  Another rabbi said that the sin of eating with unwashed hands was equal to that of lying with a harlot.   Another rabbi was imprisoned by the Romans, and he used his ration of water for ceremonial cleansing instead of drinking, nearly dying of thirst.  He was regarded as a great hero for this sacrifice.

Jesus confronted them with their hypocrisy–presenting clean external appearances but having a heart that was “far from me.”

Legalists like to take actions that are not commanded in Scripture and make them commands to obey, while at the same time ignoring (or arguing against) the real commands of Scripture (Mark 7:1-13).  Legalists want to appear righteous, but their hearts are not clean.

Jesus leaves Galilee to go to Tyre.  There, he marvels at the faith of a Syro-Phoenician woman and casts a demon out of her little girl (vv. 25-29).  Then, he goes back down to the Decapolis and healed a deaf man (vv. 30-35).

37 And they were astonished beyond measure, saying, “He has done all things well. He even makes the deaf hear and the mute speak.”

Job’s continued pain brought him from the silent, submissive attitude in chapter 2, to an assertive and angry expression in chapter 3.

Evidently the reason Job longed for nonexistence was his failure to understand his relationship with God or his place in the universe.  Job did not know as much about life and death as he assumed (cf. Job 38:2, 17).  Job does not aim for theological accuracy here, as much as expressing the deep agonies of the sufferer’s heart.

Job was in despair but not defiant toward God.  He was feeling his pain intensely but not accusing God of being unjust.  His grief had not yet descended to its lowest depths.

“Where in the world will you find a sadder strain of more hopeless, uncontrolled, and unbroken lamentation and mourning?” (Bradley) Yet, “Such outpouring is a far more healthy thing for the soul than dark and silent brooding.” (Morgan)

Notice that although Job wanted to die (a common human response to pain), he did not attempt suicide.  People usually attempt suicide when they have lost all hope.  The pressure of pain squeezes out the memories of past pleasures and blessings.  The present agony becomes so overwhelming that sufferers often cannot see hope beyond it.

This might be hard to hear, but extreme pain may be the will of God for some people.  But we must remember that God will walk with us through our sufferings and that our present sufferings are not worth comparing to our future glory (Romans 8:18; 2 Corinthians 4:16).

Romans 7, in its description of the person who desires to keep God’s law, yet cannot, has spawned many interpretations.

Paul first gives an analogy from marriage to illustrate the believer’s new relationship, or non-relationship, with the law.  Legally, a person is no longer married after death.  We died, and are therefore no longer legally bound to the law.  Now we are bound to Christ.

First of all, this person hates the sin they are doing, which seems unlikely for an unbeliever, who loves the darkness (John 3:19).  He says in verse 15, “I do the very things I hate.”   In verse 19, “the evil I do not want is what I keep on doing.”   In verse 21 he says, when I want to do right, evil lies close at hand.”  These are the words of someone who hates sin and wants to please God.

Second, he humbly and honestly acknowledges the struggle he still faces.  He calls his actions evil in Romans 7:19, 21. He says that, “nothing good dwells in me” (Rom. 7:18). He calls himself a “wretched man” in Romans 7:24.

Third, he is happiest when he is obedient to God.  In verse 22, Paul shouts a truth that is only true for born-again believers. He says, “For I delight in the law of God, in my inner being.” Like the man in Psalm 1, His delight is in the law of the Lord.  He understands that true joy is only found in those who listen to and obey God’s Word.

Fourth, he is hoping for heaven.  After walking through the despair of the Christian life, the knowledge of the fact that he will never be fully successful in his quest to put to death the deeds of the flesh, his only solution for it all is to rejoice in the deliverance found in Jesus Christ (Rom. 7:25).  Until then, he (we) will struggle with sin.

Joni Eareckson Tada, who has constantly battled pain throughout her life, said it best when she said,

“Don’t be thinking that for me in Heaven, the big deal after I get to see Jesus is to get my new body, no, no, no I want a glorified heart!  I want a glorified heart that no longer twists the truth, resists God, looks for an escape, gets defeated by pain, becomes anxious or worrisome, manipulates my husband with precisely timed phrases…”

The above arguments and quote from Joni is from an article by Jordan Standridge.