This is from the “straight through Bible reading plan” for today.

Genesis 24 is the account of Abraham’s servant going back to the land of Paddan-aram (Genesis 25:20) to get a wife for Isaac.

30 As soon as he had seen the nose ring, and the bracelets on his sister’s arms, and had [oh yeah also] heard Rebekah tell what the man said to her, he went out to the man and found him standing by the camels near the spring.

Laban’s greed is evident throughout his whole story.

Notice how specific the servant’s prayer was…

42 “When I came to the spring today, I said, ‘LORD, God of my master Abraham, if you will, please grant success to the journey on which I have come. 43 See, I am standing beside this spring. If a young woman comes out to draw water and I say to her, “Please let me drink a little water from your jar,” 44 and if she says to me, “Drink, and I’ll draw water for your camels too,” let her be the one the LORD has chosen for my master’s son.’

He wasn’t satisfied with a quick, “Lord, please bless me,” but expected a specific response from the young woman who came to draw water.  That way he could watch to see if his prayer was answered.

When we pray specifically and see God answer in just that way, then our hearts are filled with worship (Genesis 24:48).

Laban and family didn’t likely know of God’s promise to Abraham, to make his descendants as numerous as the stars (repeated in 26:4)…

17 I will surely bless you and make your descendants as numerous as the stars in the sky and as the sand on the seashore. Your descendants will take possession of the cities of their enemies,

but they said something similar…

60 And they blessed Rebekah and said to her, “Our sister, may you increase to thousands upon thousands; may your offspring possess the cities of their enemies.”

As I was reading of the sons of Abraham through his second wife, Keturah, in Genesis 25:2

2 She bore him Zimran, Jokshan, Medan, Midian, Ishbak, and Shuah.

I wondered if Midian was the same as the place where Moses went after killing the Egyptian.  Moses did send them to “the land of the east” (25:6).

It is accepted fact that Midian lay southeast of Israel and it was, in fact, the place where Moses went to escape Egypt. The description of where the sons of Ishmael, the Arabs, lived, is somewhat ambiguous

18 They settled from Havilah to Shur, which is opposite Egypt in the direction of Assyria.

That would seem to be in the same vicitnity as the Midianites and other sons of Abraham.

Genesis 25 describes Rebekah’s inability to bear children, then the birth of Esau and Jacob.  Esau was the firstborn, but despised his birthright by selling it for a pot of beans.  Jacob valued the birthright, but schemed to get it.

Then, in Genesis 26, Jacob (and Rebekah’s) scheming got Jacob the blessing from his blind father.  Somehow, it seems to me that something deeper kept Isaac from realizing that this man he was touching was not Esau.

Hebrews 12 says this about Esau…

16 that no one is sexually immoral or unholy like Esau, who sold his birthright for a single meal. 17 For you know that afterward, when he desired to inherit the blessing, he was rejected, for he found no chance to repent, though he sought it with tears.

The opportunity had passed Esau by.  He didn’t appreciate the blessings he had, but traded them for temporary pleasures.  Jacob valued spiritual blessings, but got them the wrong way.  Both of them were failures.

Paul explains that God was gracious to Jacob, though he (and we) didn’t deserve it.  Romans 9…

10 And not only so, but also when Rebekah had conceived children by one man, our forefather Isaac, 11 though they were not yet born and had done nothing either good or bad–in order that God’s purpose of election might continue, not because of works but because of him who calls– 12 she was told, “The older will serve the younger.” 13 As it is written, “Jacob I loved, but Esau I hated.”

Paul goes on to answer the objection that this whole situation was “unjust” in Romans 9:14-16.

Isaac, faced with a famine (Genesis 26), was told by God not to go down to Egypt.  Isaac went to Gerar, which was about on the edge of the land promised to Abraham. 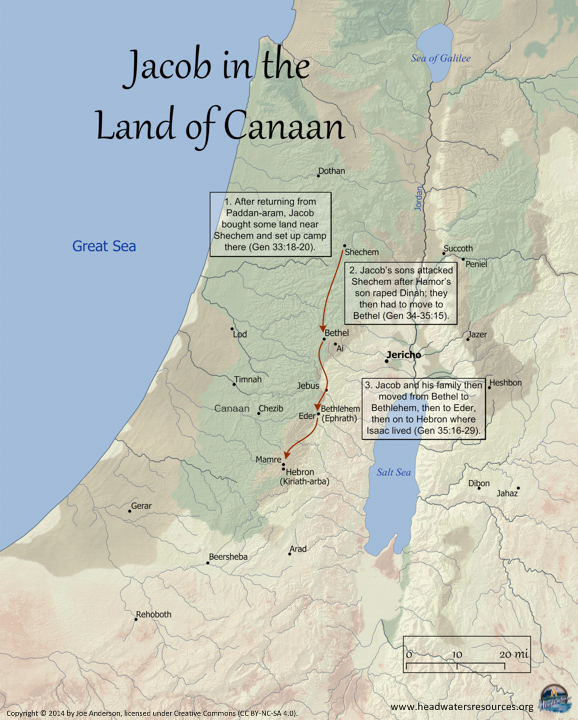 Like father, like son, Isaac lied about his wife to king Abimelech.  With disputes about wells with the Philistines, Isaac went to Rehoboth, and then finally back up to Beersheba (Genesis 26:22-23).  There God renewed the covenant with him…

24 And the LORD appeared to him the same night and said, “I am the God of Abraham your father. Fear not, for I am with you and will bless you and multiply your offspring for my servant Abraham’s sake.”

I wonder how many bad marriages have “made life bitter” (Genesis 26:34-35) for Dad and Mom?  And, of course for the person who got married.