In Exodus 4 Moses continues to make excuses.  In other words, Moses keeps beating around the bush.

Bible commentator G. Campbell Morgan has written:  “We are ever prone, when God is calling us to some high service, to say ‘But,’ and this to introduce our statement of the difficulties as we see them.”

God likes to use what you already have…what you’ve got in your hand. 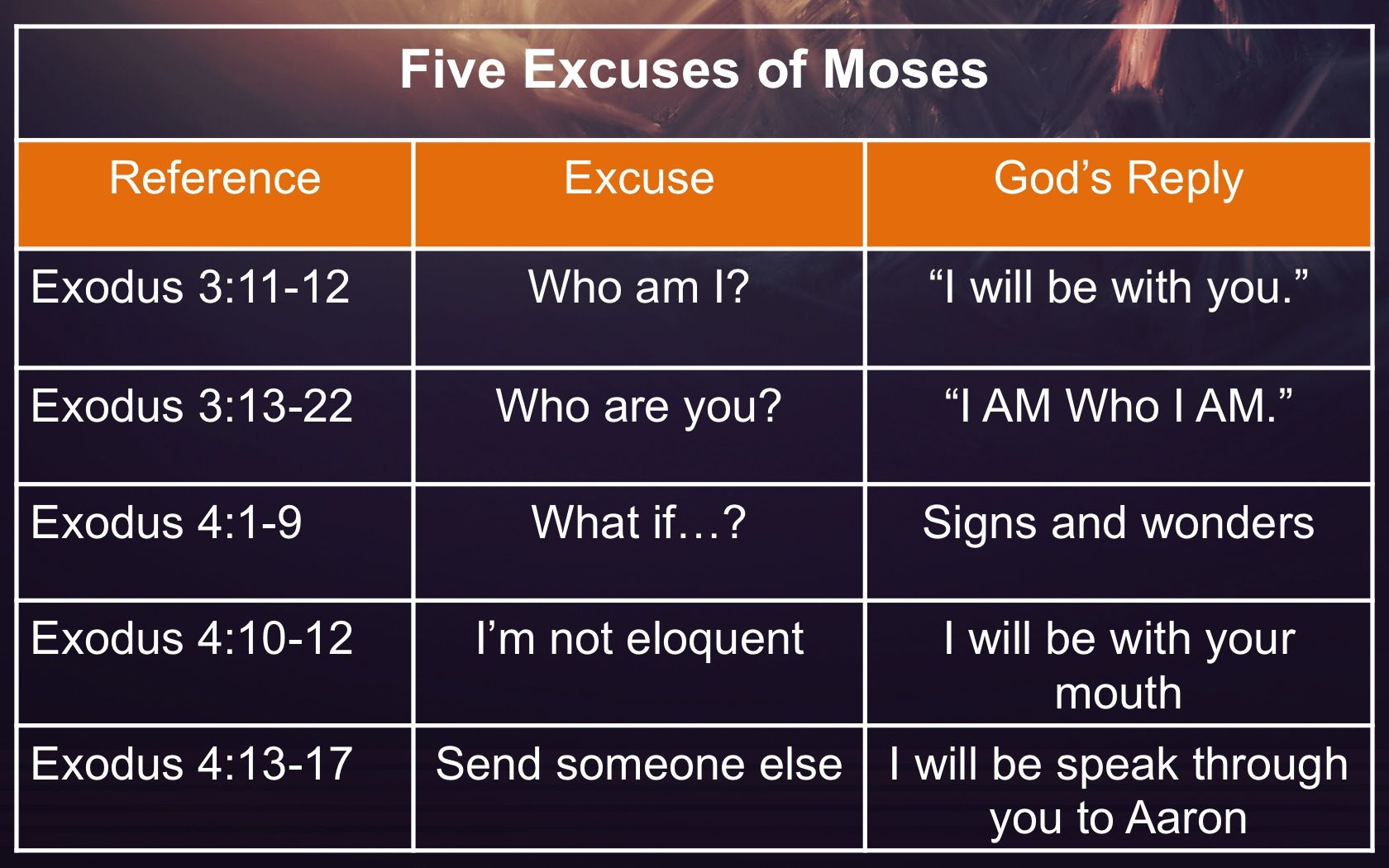 Back when I was in high school, I remember hearing Ken Medema, a fantastic blind piano player, playing his song Moses.

Moses should have obeyed the Lord in simple dependence, knowing that His commands are His enablements.  God never asks us to do anything without giving us the power to do it.  Because Moses was not satisfied with God’s best, he had to take God’s second best—that is, having Aaron be his spokesman.  Moses thought that Aaron would be a help, but he later proved to be a hindrance in leading the people to worship the golden calf (chapter 32).

So Moses returns to Egypt.  He is now 80 years old (Exodus 7:7), two-thirds of his life over.  But God will use him greatly in the time he has left.  Take heart!  No matter how long God takes to train you, He can do more in those weeks, months or years you have left than you could imagine!

21 The LORD said to Moses, “When you return to Egypt, see that you perform before Pharaoh all the wonders I have given you the power to do. But I will harden his heart so that he will not let the people go.

Notice again (v. 21) that although there will be this mysterious interplay between God hardening Pharaoh and Pharaoh hardening his own heart in chapters 7-10, we have the prediction here that “I will harden his heart…”

We might say that it was both God and Pharaoh; but whenever God hardened Pharaoh’s heart, He never did it against Pharaoh’s will.  Pharaoh never said, “Oh, I want to do what is good and right and I want to bless these people of Israel” and God answered, “No, for I will harden your heart against them!”  When God hardened, He allowed Pharaoh’s heart to do what Pharaoh wanted to do – God gave Pharaoh over to his sin (Romans 1:18-32).

But before Moses arrives in Egypt we have this strange passage:

24 At a lodging place on the way, the LORD met Moses and was about to kill him. 25 But Zipporah took a flint knife, cut off her son’s foreskin and touched Moses’ feet with it. “Surely you are a bridegroom of blood to me,” she said. 26 So the LORD let him alone. (At that time she said “bridegroom of blood,” referring to circumcision.)

God made Moses very ill because he had apparently not circumcised at least one of his two sons.  This was the sign of the Abrahamic covenant and as a leader of Israel, Moses could not forego this.  God’s sentence for this sin of omission (an Israelite failing to have his son circumcised) was death (“cut off from his people,” cf. Gen. 17:14).

Was God prepared to put to death His carefully prepared deliverer just because of this?

Apparently this was the final stage of preparation.  God was bringing Moses to a place of recognizing God’s ultimate sovereignty over all.  It was Moses’ Jabbok.

The “bridegroom of blood” figure (v. 26) evidently means the following: Apparently Zipporah regarded her act of circumcising her son as the factor that removed God’s hand of judgment from Moses, and restored him to life and to her again. It was as though God had given Moses a second chance, and he had begun life as her husband all over again, as a bridegroom (cf. Jonah). (Thomas Constable)

The Centurion showed unusual faith, the text says nothing about the widow’s faith.  John’s faith is wavering and the woman’s faith encourages her to do something risky. This is one of my favorite passages.  I preached on it years ago at East Evangelical Free Church in Wichita, Kansas and Sherry Cowan gave me the above figurine.  I still have it in my office at church.

She, though a well-known sinner, treated Jesus with love and honor, whereas Simon gave no evidence of love.  Jesus confronts us with the reality that “whoever has been forgiven little loves little.”  The greater your sense of your sin and God’s forgiveness of it, the more love you will have for Christ.

Here Job tells them that the wicked don’t always suffer.  Sometimes they live in peace and prosperity (21:7-16).  They die, but so do the righteous, because we’re all sinners (21:17-26), yet they may live their whole lives in prosperity (21:27-34).  Job’s account is more realistic than that of his friends.

But, this was not going to stop Job’s friends, if you can still call them that.

“God is pleased to do wonderful contradictory things in man’s reason; so that we must needs confess an unsearchableness in his ways. . . . In this work of his, human reason is blinder than a mole.”

1 Corinthians 8 begins Paul discussion about the issue of eating meat offered to idols, which will carry us through 11:1.  Gordon Fee gives us this background information:

“That going to the temples is the real issue is supported by the fact that the eating of cultic meals was a regular part of worship in antiquity.  This is true not only of the nations that surrounded Israel, but of Israel itself.  In the Corinth of Paul’s time, such meals were still the regular practice both at state festivals and private celebrations of various kinds.  There were three parts to these meals: the preparation, the sacrifice proper, and the feast.  The meat of the sacrifices apparently was divided into three portions: that burned before the god, that apportioned to the worshipers, and that placed on the ‘table of the god,’ which was tended by cultic ministrants but also eaten by the worshipers.  The significance of these meals has been much debated, but most likely they involved a combination of religious and social factors.  The gods were thought to be present since the meals were held in their honor and sacrifices were made; nonetheless, they were also intensely social occasions for the participants.  For the most part the Gentiles who had become believers in Corinth had probably attended such meals all their lives; this was the basic ‘restaurant’ in antiquity, and every kind of occasion was celebrated in this fashion

“The problem, then, is best reconstructed along the following lines. After their conversion—and most likely after the departure of Paul—some of them returned to the practice of attending the cultic meals. In his earlier letter Paul forbade such ‘idolatry’; but they have taken exception to that prohibition and in their letter have made four points:

“(3) They seem to have a somewhat ‘magical’ view of the sacraments; those who have had Christian baptism and who partake of the Lord’s Table are not in any danger of falling (10:1-4).

“(4) Besides, there is considerable question in the minds of many whether Paul has the proper apostolic authority to forbid them on this matter. In their minds this has been substantiated by two factors: first, his failure to accept support while with them; and second, his own apparently compromising stance on idol food sold in the marketplace (he abstained when eating with Jews, but ate when eating with Gentiles; cf. 9:19-23).

It is a passage directed toward those whose have their facts right but hearts wrong. Here Paul addresses the intelligent but unloving.

So Paul is telling the Corinthians that love should supersede knowledge.  In other words, just because you know something is OK to do, doesn’t mean you should do it.  One must love God and their brothers and sisters in Christ.  There is, in reality, only one true God.  Therefore, the idols are not really gods.  But, it is more important to not put a stumbling block in front of your brother. (Go back to Romans 14 for a deeper discussion of the conscience.)

Thomas Constable provides this illustration of how to put these principles into practice:

The issue in this chapter is not that of offending someone in the church.  Paul dealt with that subject in 10:31—11:1 and Romans 14.  It is, rather, doing something that someone else might repeat to his or her own hurt (“causing my brother to stumble”). Paul dealt with an attitude in the Corinthians.

Our American culture idolizes our freedom to do what we want.  Paul is saying that there is a higher value than personal freedom.  There are times we need to curtail our freedom so as not to lead others into sin.