As Jacob blessed Joseph’s two sons in Genesis 48, he now blesses his own sons in Genesis 49.  Some of these are not so much “blessings” as they are prophecies regarding what God will do with these tribes in the future (David Guzik).

Reuben, though firstborn, he forfeited his rights due sleeping with his father’s concubine Bilhah (Genesis 35:22).

Simeon and Levi, due to their cruelty in dealing with the men of Shechem in retaliation for the rape of their sister Dinah (Genesis 34:25-29), receive a curse instead of a blessing (v. 7).

Judah, the fourth born, receives the major blessing, and will be the progenitor of the Messianic King.  Jesus comes from the tribe of Judah (cf. Rev. 5:4-5)

Zebulon would settle towards the sea.

Issachar would be a large tribe, but because of its position would often be raided by foreign armies and became slave labor. 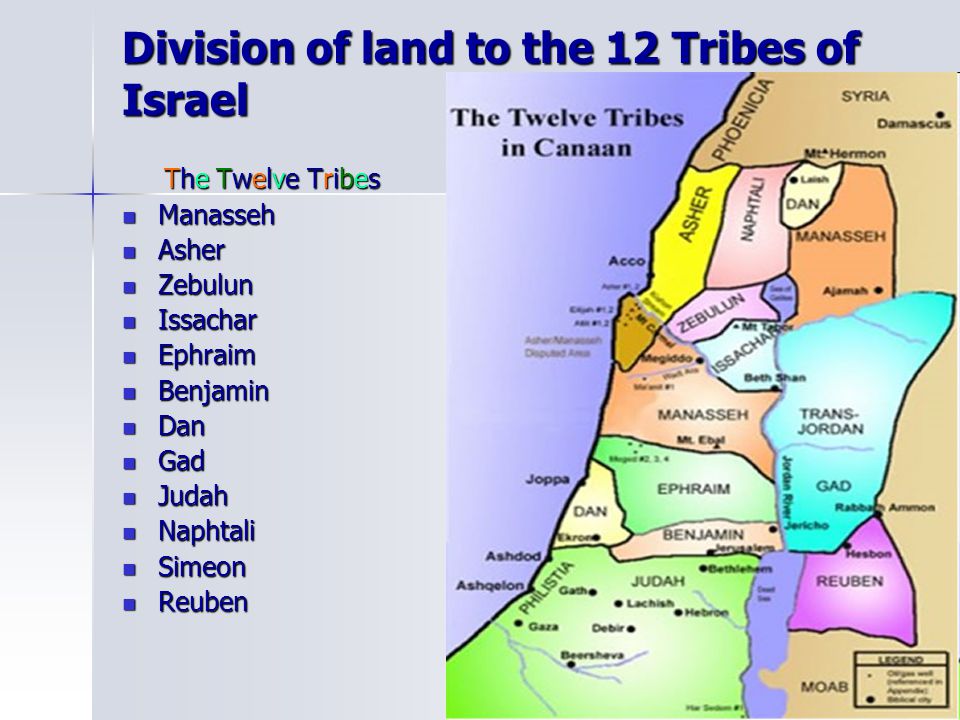 Dan will be a judge.  Samson came from the tribe of Dan.  But Dan was a troublesome tribe. They introduced idolatry into Israel (Judges 18:30). Jeroboam set up one of his idolatrous golden calves in Dan (1 Kings 12:26-30) and later Dan became a center of idol worship in Israel (Amos 8:14).

Gad would be raided and be raiders.  Life would be turmoil for them.

Asher would provide royal delicacies of food.  Their allotment contained some of the most fertile land in Canaan.

Naphtali “is a doe let loose that bears beautiful fawns.”  Not sure what that means.

Joseph, and his two sons, obtained the double portion of the birthright.

Benjamin produced many warriors in Israel’s history and demonstrated the most warlike character among the tribes.

Verses 29-33 record instructions for the burial of Jacob.  Jacob again expressed his faith in God”s promises that Canaan would be the Israelites’ homeland by requesting burial in the Cave of Machpelah near Hebron (cf. Genesis 47:29-31; Genesis 48:21-22).

10 And the angel said to them, “Fear not, for behold, I bring you good news of great joy that will be for all the people. 11 For unto you is born this day in the city of David a Savior, who is Christ the Lord.

The news of Jesus’ birth is “good news.”  It is the gospel.  It brings “great joy.”  Even here at the beginning of Luke’s gospel, he reveals that Jesus came not just for the Jews, but “for all the people.”  Yet, He is a Jewish Savior, born “in the city of David,” in the line of David.  Simeon will call Jesus “a light for revelation to the Gentiles, and for glory to your people Israel” (2:32).

The three titles given to him are Savior, Christ and Lord.

There were differing responses to the birth of Jesus: (1) the angels sang, (2) the shepherds told, (3) Mary treasured (and we know from Matthew that Herod trembled).

Mary “treasured up all these things in her heart” (vv. 19, 51).  And later she told Luke about these things.

Eliphaz felt insulted that Job, a younger man, had rejected the wisdom of his older friends.  This was an act of disrespect on Job’s part, and Eliphaz interpreted it as a claim to superior wisdom.  Job had made no such claim, however; he only said he had equal intelligence (12:3; 13:2).  He did not claim to know why he was suffering as he was, only that his friends’ explanation was wrong.  Eliphaz interpreted Job’s prayers of frustration to God as rebellion against God (vv. 12-13), which they were not.  We need to be careful to avoid this error too.  Eliphaz was correct in judging all people to be corrupt sinners (v. 14), but he was wrong to conclude that Job was suffering because he was rebelling against God. (Tom Constable)

“Poor Job!  What a fight of affliction had he to contend with!  His body wasted and tortured with sore disease, his mind harassed by Satan; and his heart wrung with the unkindness, and false accusations of his friends.  No wonder he was greatly agitated, often distracted, and sometimes even thrown off his guard.  However, all his enemies were chained; and beyond that chain they could not go.  God was his unseen Protector, and did not suffer his faithful servant to be greatly moved.”

Tom Constable has this chart:

In vv. 5-17 Paul indicates how his readers should view him and his fellow workers (unlike 1:12-13).  All men are on the same level, under God.  God is the one responsible for growth.

Christ is also the foundation.  There is no Christian life without Christ as the foundation.  Upon that foundation we can build–with gold, silver and precious stones, or wood, hay and stubble.  The fire will prove which it is.

This passage is talking about rewards we will receive in heaven.  We will stand before the judgment seat of Christ (NOT the Great White Throne in Rev. 20) and be evaluated for our service record (NOT our sins).

The fire will prove whether the things we’ve done for Christ will last.  I believe there are stay-at-home moms who will receive as great or even greater rewards for their service to Christ by loving their families, as pastors or missionaries who preach the gospel regularly.

Why?  What is the difference between gold, silver and precious stones, which last, and wood, hay and stubble, which are burned up?

I believe it depends upon two factors:  Why are we doing these acts of service?  What strength are we depending upon?

When we do anything for the glory of God and good of others and we do it in the strength which God supplies rather than our own, I believe we are building rewards that last.

By the way, Paul is not speaking of purgatory here.  It is the works that are burned by fire, not the person.

Note also that a person who is saved, may build very little upon the foundation of Christ.  Notice that Paul says he (or she) is still saved…

15 If anyone’s work is burned up, he will suffer loss, though he himself will be saved, but only as through fire.

We are saved by grace, not by works.  But we were saved for good works.  When we pursue good works for God’s glory and in God’s strength, we gain eternal reward.

Paul gives a very strong warning to church splitters in 1 Cor. 3:16-17.  Just as in the ancient world defacing or destroying a temple was a capital offense, so God will send serious discipline to those who tears down a church.

The apostle now (vv. 18-23) combines the threads of his argument, which began at 1:18, and drew a preliminary conclusion.  If his readers insisted on taking the natural view of their teachers and continued to form coteries of followers, they would limit God’s blessing on themselves needlessly.  Rather than their belonging to Paul or Apollos, both Paul and Apollos, and much more, belonged to them because they were Christ’s and Christ is God’s.