Today’s readings are from Exodus 27, John 6, Proverbs 3 and Galatians 2.

Exodus 27 gives the specifications for the bronze altar, court of the Tabernacle, and the oil for the lamps (27:1-21).  The bronze altar (27:1-8) points to Jesus Christ as the willing substitute sacrifice. 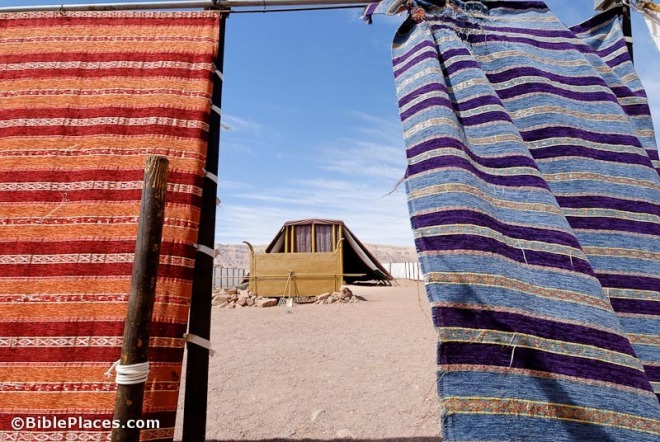 Finally, the type of oil is specified (27:20-21) that the priests were to prepare and use in the tabernacle.  The priests had to trim the wicks and refill the oil in the lamps on the lampstand, in the holy place, every evening—to make them “burn continually.” Thus there was “light” in the holy place all night long (cf. Lev. 24:3; 1 Sam. 3:3).

John 6 begins with the feeding of the 5,000, one of the only miracles recorded in all four gospels.  Jesus is at the high point of His public ministry.  Excitement continues to build, but so does opposition.

This picture, from Ferrell Jenkins, shows the Plain of Bethsaida in the depressed green area in the middle left.

This sign demonstrated Jesus’ identity as the Son of God, and it prepared for Jesus’ revelation of Himself as the Bread of Life (vv. 22-59).

Notice that this sign illustrates three solutions to problems that people typically try. First, Philip suggested that money was the solution to the problem (v. 7).  Second, Andrew looked to people for the solution (v. 9).  Third, Jesus proved to be the true solution (v. 11).  A fourth solution appears in the other Gospel accounts of the miracle (Matt. 14:15; Mark 6:36; Luke 9:12): get rid of the problem.  The disciples told Jesus to send the people away, to let them fend for themselves (cf. Matt. 15:23).

William Barclay says, “Jesus needs what we can bring him.  It may not be much but he [asks for] it.  It may well be that the world is denied miracle after miracle and triumph after triumph because we will not bring to Jesus what we have and what we are.   If we would lay ourselves on the altar of his service, there is no saying what he could do with us and through us.  We may be sorry and embarrassed that we have not more to bring—and rightly so; but that is no reason for failing to bring what we have.  Little is always much in the hands of Christ.”

Jesus then sends His disciples across the Sea of Galilee.  He is not initially with them, but walks out to them in the midst of a storm.

Proverbs 3 and 4 are the theological center of the book, encouraging the pursuit and reliance upon God’s wisdom.  Children are encouraged to trust in the Lord (3:1-12), pursue wisdom (3:13-26) and experience its blessings, and treat their neighbor in love (3:27-30).

It is important, but sometimes difficult, for us to remember that the Lord loves us (not in spite of, but) through discipline (vv. 11-12).

C. S. Lewis illustrates the truth by noting that an artist may not take much trouble over a picture drawn to amuse a child, but he takes endless effort over his great work of art that he loves.  Leonardo da Vinci labored for many years over the Mona Lisa, in effect never really finishing it.

Galatians 2 begins with Paul stresses his independence from the other apostles in general (2:1-10) and Peter in particular (2:11-21).  Paul speaks of his meeting with the Jerusalem church leaders.  He did so to establish for his readers that, although he was not dependent on anyone but God for his message and ministry, he preached the same gospel the other apostles did.

Paul next (vv. 11-21) mentioned the incident in which he reproved Peter, the Judaizers’ favorite apostle, to further establish his own apostolic authority, and to emphasize the truth of his gospel.  He rebukes Peter because his “conduct was not in step with the truth of the gospel.”  The gospel calls us to live and interact with others in a certain way–through grace.

Peter had been freely eating with Gentiles UNTIL some important Jews from Jerusalem arrived.  Then he avoided them, wanting to please “the circumcision party.”  By his actions Peter was denying the truth of the gospel, which is ” person is not justified by works of the law but through faith in Jesus Christ” (v. 16).

Verse 16 contains three statements.  Each statement deals with this same truth of justification.  The first statement is general.  The second. statement is personal.  The third statement is universal.

“To give a short definition of a Christian:  A Christian is not somebody who has no sin, but somebody against whom God no longer chalks sin, because of his faith in Christ.  This doctrine brings comfort to consciences in serious trouble.”

How is it a sin to build again a way to God through the Law of Moses?  In many ways, but perhaps the greatest is that it looks at Jesus, hanging on the cross, taking the punishment we deserved, bearing the wrath of God for us, and says to Him, “That’s all very nice, but it isn’t enough.  Your work on the cross won’t be good enough before God until I’m circumcised and eat kosher.”  What an insult to the Son of God!

Of course, this is the great tragedy of legalism.  In trying to be more right with God, they end up being less right with God.  This was exactly the situation of the Pharisees that opposed Jesus so much during His years of earthly ministry.  Paul knew this thinking well, having been a Pharisee himself (Acts 23:6).

Galatians 2:20 is a favorite verse of mine:

20 I have been crucified with Christ.  It is no longer I who live, but Christ who lives in me.  And the life I now live in the flesh I live by faith in the Son of God, who loved me and gave himself for me.

What happened to me in the past, when I believed in Christ?  I was crucified.  The old me died and I no longer live (as that person).  Now Christ lives in me.  When I believe that (trust that truth moment by moment), He can live through me and His life produces practical righteousness in my life.