Today’s Bible readings are from Leviticus 2-3, John 21, Proverbs 18 and Colossians 1.

Christ fulfilled the requirements of this sacrifice, too (John 8:29).  The fine flour suggests the perfection of His personality made perfect through suffering.  The oil suggests the Holy Spirit’s presence in His life, the frankincense the fragrance of His life brought out by the fires of testing, and the salt the incorruptibility of His character.  Honey, representing natural sweetness that sours, and leaven, which often represents sin and evil in Scripture, picture what was absent from His nature.

The “peace (fellowship [NIV], well-being [NRSV]) offering” is the third sacrifice of worship (Lev. 3).  It represented the personal fellowship between God and each Israelite person, and between believing Israelites, that resulted from the relationship that God had established with the redeemed individual (cf. Rom. 5:1).

Peace and fellowship resulted from redemption, and this act of worship highlighted those blessings from God.  This was an optional sacrifice; an Israelite could bring it if and when he desired.  Thus it was not one of the offerings that the priests presented daily in the tabernacle, though God did order its presentation at the Feast of Pentecost (Harvest, Weeks; 23:19).  Because it was voluntary, its offering became a festive occasion.

There were three different kinds of peace offerings: One was a “thanksgiving offering,” in which an Israelite expressed thanks for a particular blessing (7:12-15).  Another was a “votive offering,” that the Israelites could offer after an acute experience of distress—or joy—that had elicited a vow from him or her (cf. Jon. 2:9).  The third was a “freewill offering,” that the Israelite could offer as an expression of gratitude to God, without reference to any particular blessing (7:16-18).

Christ is the peace of believers, because of His sacrifice on the cross (Eph. 2:14).  All of the animals used in this offering have been thought by some to represent different aspects of the person of Christ: Animals from the “herd” (cattle) represent Christ as our burden-bearer.  The “lamb” stands for Him as our perfect sacrifice, and the “goat” suggests Him as the One who takes away sin.  The inward parts of these animals that were offered suggest that God sees the inner parts of Christ [his heart, integrity] as acceptable to Him.

This Gospel began with a theological prologue (1:1-18), and it ends with a practical epilogue. John concluded his narrative, designed to bring unbelievers to faith in Jesus Christ, in chapter 20.  Chapter 21 contains instruction for those who have come to faith in Him, and explains how they are to serve Him as they carry out their mission (20:21-23).

Jesus first appears to the seven disciples, performing the miracle of the large catch of fish, just as He did when he formally called them to follow Him (21:1-14; cf. Luke 5:1-11).

It is likely that this happened at the same place, as well, at Tabgha 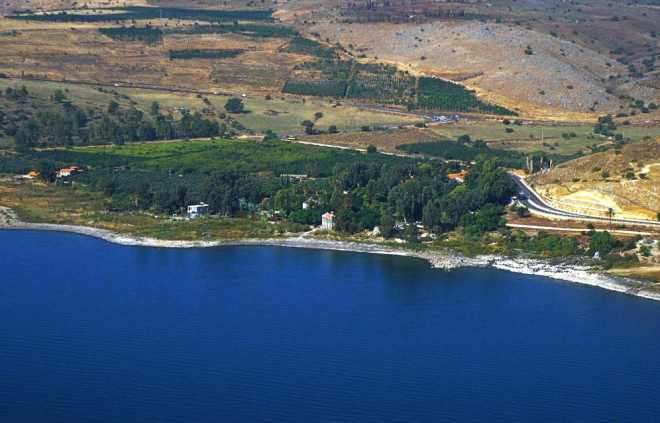 Then Jesus deals particularly with Peter, piercing his heart with three questions, which caused Peter to have to deal with his three denials (21:15-19).

Peter miserably failed his Lord when he fled with the other disciples from the Garden of Gethsemane.  Later, he publicly denied that he even knew Jesus.  Peter must have wondered if he was even capable of being Jesus’ disciple when he was unfaithful to Jesus in His most crucial hour.

You may be painfully aware that you have failed your Lord in many ways.  Perhaps you were not faithful.  Perhaps you disobeyed His word to you.  Perhaps you denied Him by the way you lived.  Jesus will not berate you.  He will not humiliate you.  He will ask you to examine your love for Him.  He asked Peter, “Do you love Me?”  If your answer, like Peter’s, is “Yes, Lord,” He will reaffirm His will for you.  If you truly love Him, you will obey Him (John 14:15).  Jesus does not need your resolutions, your re-commitments, your promises to try harder.  Jesus asks for your love.  Then your service to Him will be what He desires.

“Jesus Christ asks each one of us, not for obedience primarily, not for repentance, not for vows, not for conduct, but for a heart; and that being given, all the rest will follow.” (Alexander Maclaren)

The chapter ends with Jesus telling Peter not to be distracted by John’s calling, but to focus on his own calling (21:20-25).  David Guzik writes:

How easily we get distracted from our own responsibilities and calling by wondering about the details of someone else’s walk with the Lord.  We critique, we second-guess, we opine.  Jesus says to us what he said to Peter:  “What is that to you?”  Let us serve others, but mind our own business!

1 Whoever isolates himself seeks his own desire; he breaks out against all sound judgment. 2 A fool takes no pleasure in understanding, but only in expressing his opinion.

These first two verses show the foolishness of separating oneself from community and not listening to counsel.  He will listen to no one but himself.  Lot would be a good example.  He separated himself from Abram and his example and counsel.

There are a number of sayings about the tongue in this set of proverbs:

2 A fool takes no pleasure in understanding, but only in expressing his opinion.

4 The words of a man’s mouth are deep waters; the fountain of wisdom is a bubbling brook.

Not that everyone’s speech is deep and meaningful! Rather, we reveal the depths of our heart by the words of our mouth.

6 A fool’s lips walk into a fight, and his mouth invites a beating.

He who thinks by the inch and speaks by the yard deserves to be kicked by the foot!

7 A fool’s mouth is his ruin, and his lips are a snare to his soul.

“It is most remarkable that the apostle Paul, when analyzing man’s depravity, focuses on the little member and all that is linked to it—the throat, the tongue, the lips, and the mouth (Romans 3:13-14).” (Bridges)  Likewise, Isaiah realized that God was dealing primarily with his tongue (Isaiah 6:5-6).

8 The words of a whisperer are like delicious morsels; they go down into the inner parts of the body.

Because gossip is so tantalizingly tasty, those who should know better find it difficult to tell the whisperer to stop talking. 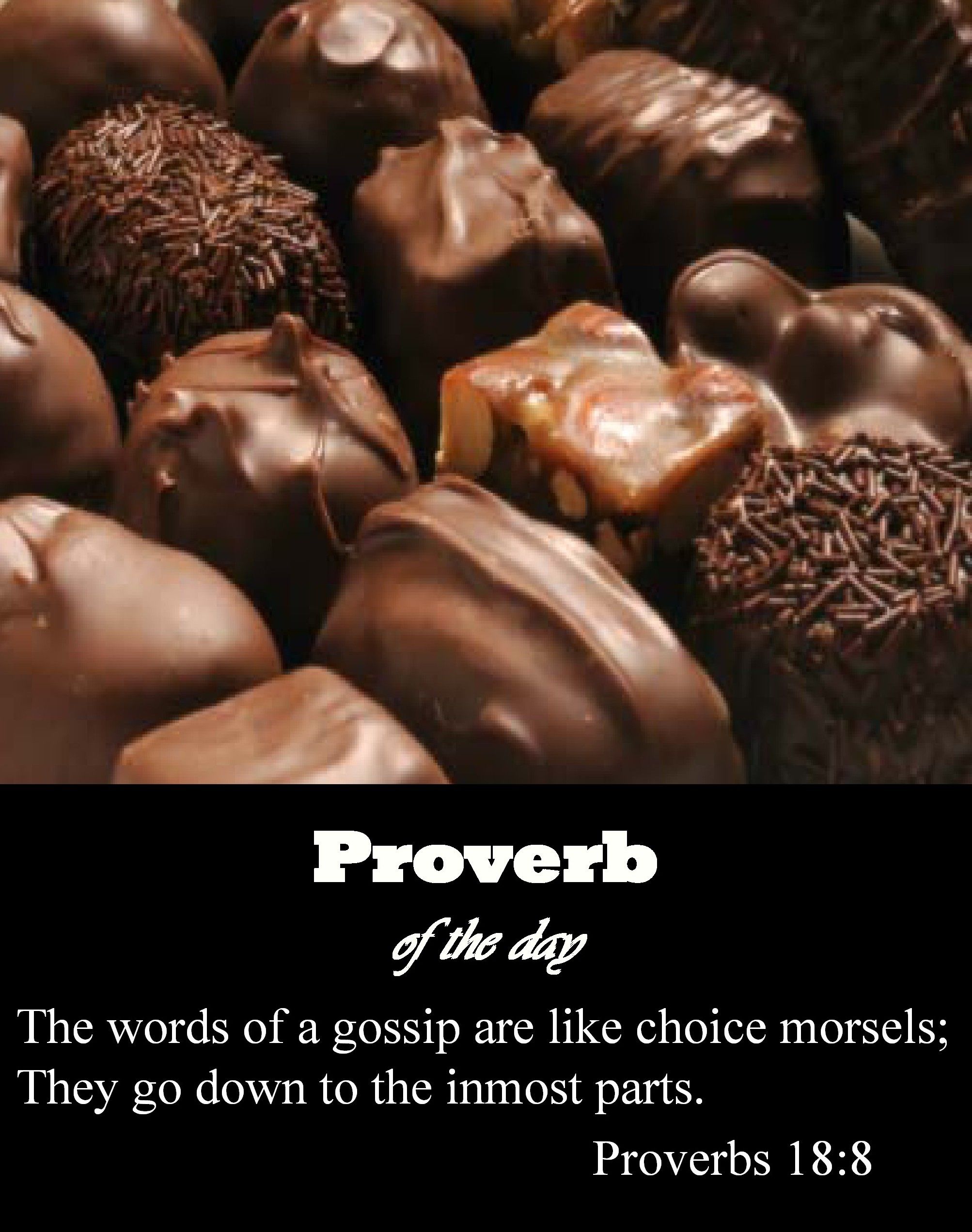 Feast on the Word of God not the words of gossip.

13 If one gives an answer before he hears, it is his folly and shame.

James tells us to be “quick to hear…slow to speak.”

20 From the fruit of a man’s mouth his stomach is satisfied; he is satisfied by the yield of his lips.

This is another way of saying you reap what you sow.

21 Death and life are in the power of the tongue, and those who love it will eat its fruits.

The tongue is very powerful.  This is a warning about being too talkative.

9 And so, from the day we heard, we have not ceased to pray for you, asking that you may be filled with the knowledge of his will in all spiritual wisdom and understanding, 10 so as to walk in a manner worthy of the Lord, fully pleasing to him, bearing fruit in every good work and increasing in the knowledge of God. 11 May you be strengthened with all power, according to his glorious might, for all endurance and patience with joy,

13 He has delivered us from the domain of darkness and transferred us to the kingdom of his beloved Son,

“There is no neutral ground in the universe: every square inch, every split second, is claimed by God and counterclaimed by Satan.”

In Every Good Endeavor, Keller reminds his reader of the well-known line from Abraham Kuyper: “There is not a square inch in the whole domain of our human existence over which Christ, who is Sovereign over all, does not cry: ‘Mine!” (Quote from Kuyper’s inaugural address at the dedication of the Free University. Found in Abraham Kuyper: A Centennial Reader, ed. James D. Bratt (Eerdmans, 1998), 488).

15 He is the image of the invisible God, the firstborn of all creation. 16 For by him all things were created, in heaven and on earth, visible and invisible, whether thrones or dominions or rulers or authorities–all things were created through him and for him. 17 And he is before all things, and in him all things hold together.  19 For in him all the fullness of God was pleased to dwell,20 and through him to reconcile to himself all things, whether on earth or in heaven, making peace by the blood of his cross.

Jesus Christ is God very God (v. 15) who created (v. 16) and sustains (v. 17) all things.  Complete deity dwells in him, that is it is his very nature.  And through His humanity we can be reconciled to God because He made peace by shedding his blood on the cross.

24 Now I rejoice in my sufferings for your sake, and in my flesh I am filling up what is lacking in Christ’s afflictions for the sake of his body, that is, the church,

Realize that the word “afflictions” is never used of Christ’s suffering and death on the cross.  It likely refers to the afflictions he suffered while alive.  In that sense Paul could continue the afflictions of Christ.   J. T. Robertson notes:

“Paul attaches no atoning value whatever to his own sufferings for the church.”

It may be similar to what Christ said to Paul on the road to Damascus, “Why are you persecuting me?” (Acts 9:4).  By persecuting the church Paul was persecuting Christ.

Colossians 1:28-29 are two of my favorite verses on ministry:

28 Him we proclaim, warning everyone and teaching everyone with all wisdom, that we may present everyone mature in Christ. 29 For this I toil, struggling with all his energy that he powerfully works within me.

Verse 28 identifies my purpose–to present everyone mature in Christ before God.

Verse 29 reveals my power–it comes from God as I toil and struggle in ministry.