Today’s Bible readings are from Exodus 36, John 15, Proverbs 12 and Ephesians 5.

For the construction of the tabernacle there was a cadre of skilled workmen (Exodus 36:1-2) and plenty of resources (36:3-7).  In fact, the people had such generous willingness to give that there was “more than enough” (v. 5) and Moses asked them to stop giving (vv. 6-7), every building manager’s dream!

This follows the pattern of God’s giving to us.  God gives us much more than we ever need, and our giving is simply a response to His. (David Guzik)

Dutch theologian Herman Witsius (1636 – 1708) notes that it took God six days to create the universe and it took the craftsmen of Israel six days to build the tabernacle.

In John 15 Jesus speaks of the intimate relationship we can have with God through the image of the vineyard.  In this image, the Father is the vinedresser, Jesus is the vine and we are the branches.  Abiding in Jesus, like a branch is connected to the vine–drawing life from it–is the way that we bear fruit.

The expectation is that we would bear fruit, even “more fruit” (v.2) and “much fruit” (v. 8).  We cannot bear fruit unless we stay attached to Jesus.

When branches (believers) don’t bear fruit they are “taken away.”   Is this parallel to v. 6 where they are “thrown away” and “thrown into the fire,” or something different.

James Montgomery Boice (among others) believes that the ancient Greek verb airo, translated, takes away is more accurately translated lifts up.  The idea is that the Father lifts up unproductive vines off of the ground (as was common in the ancient practices of vineyard care).  Those caring for ancient grape vines made sure to lift them up off the ground that they might get more sun and bear fruit better. 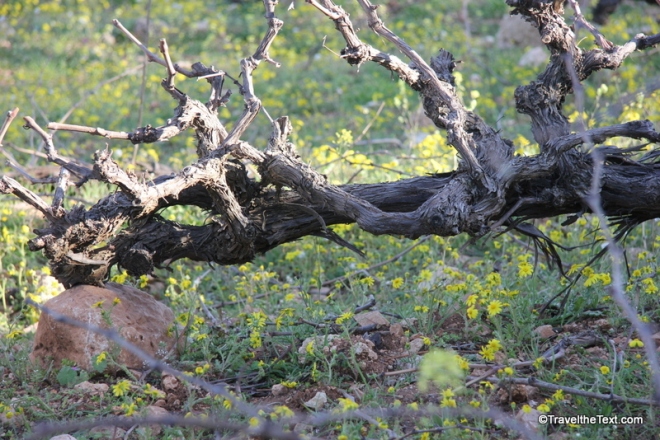 Also, according to Derrickson, “the viticulture process that Jesus described in verse 6 took place in the fall, whereas the process He mentioned in verse 2 happened in the spring” (Viticulture and John 15:1-6, Bibliotheca Sacra 153:609 (January-March 1996, p. 50-51).

The image is dropped in vv. 12-17, but Jesus continues in the theme of a close relationship with him (as “friend”).  Here the emphasis is on loving one another, the prime fruit of an abiding disciple.

Jesus then talks about their relationship with the world (vv. 18-27), that the world will hate them, but the Spirit will be with them.  They shouldn’t expect anything but persecution from the world, because it hated (hates) Jesus as well.

In Proverbs, one who is right (or wise) in his own eyes sees no need to seek instruction or counsel from others and is thus also unwilling to listen to reproof.  Proverbs strongly warns against this (see 3:5-7), because no one is immune to self-deception (see 16:2; 21:2), which can lead to the nearly hopeless state of having a hard heart (see 26:12). (ESV Study Bible)

What good word can you speak into an anxious person’s life today?

“All God’s gifts, including sex, are subjects for thanksgiving, rather than for joking.  To joke about them is bound to degrade them; to thank God for them is the way to preserve their worth as the blessings of a loving Creator.” (John Stott, Ephesians, p. 193)

Because we are light (new nature), we should walk in the light.  Part of that is continually discerning God’s will (5:10), making the most of every opportunity (5:16) and being filled with the Spirit (5:18).

How are we filled with the Spirit?  There are no instructions here but we would assume that we must first confess our sins, then offer our bodies as living sacrifices, then ask the Spirit to take control of us.

Having explained the basic admonition to be filled with the Spirit (vv. 15-21), Paul next applied the implication of this exhortation to various groups of Christians.

The command to wives is to submit to their husbands, which I believe is the joyful disposition to support and respond to her husband’s leadership.

The command to husbands is to sacrifice themselves for their wives.  Husbands must take the responsibility to lead their wives, which is neither tyranny nor milquetoast.  If he loves her, he will lead her for her good.

This reflects the relationship between Christ and the church.  The church submits to Christ, Christ gave up His life for His bride.