Exodus 13 deals with the dedication of Israel’s firstborn to the Lord (13:1-16) and the initial journey from Succoth to Etham (13:17ff).  Tomorrow we will observe their dramatic deliverance at the Reed Sea.

The dedication of every firstborn Israelite male baby was to take place after the nation had entered the Promised Land (vv. 5, 11-12).  This was originally to be a memorial of God’s redemption from Egyptian slavery, as were the feasts of Passover and Unleavened Bread (cf. 12:14).  However, God took the Levites for His special possession in place of the firstborn.  This happened at Mt. Sinai (Num. 3:12-13).  Consequently, this “firstborn dedication” never took place, but the Israelites did circumcise their sons and observe the Passover when they first entered the Promised Land (Josh. 5:4-7).

By the way, the route of the Exodus has several variations.  A newer, and quite popular internet proposal has Israel crossing the Gulf of Aqaba.  That is the purple route on the map below.

The traditional route is pictured in red above.

The Israelites now begin their migration from Egypt to Canaan.  The words “Red Sea” in v. 18 is actually “yam suph,” “sea of reeds.”  Apart from Exodus 14, the word suph appears four other times in the Hebrew Bible, always referring to a marshy plant.  The translation “Red Sea” (see it at the bottom of the map) comes from a mistranslation in the Septuagint Ερυθρὰ Θάλασσα. This map shows them crossing the northernmost part of what is today called the Suez Canal.

Another possible route is shown on this map from articles by Gary Byers on the Associates for Biblical Research website.  This takes into account the “turn back” command in Exodus 14:1. 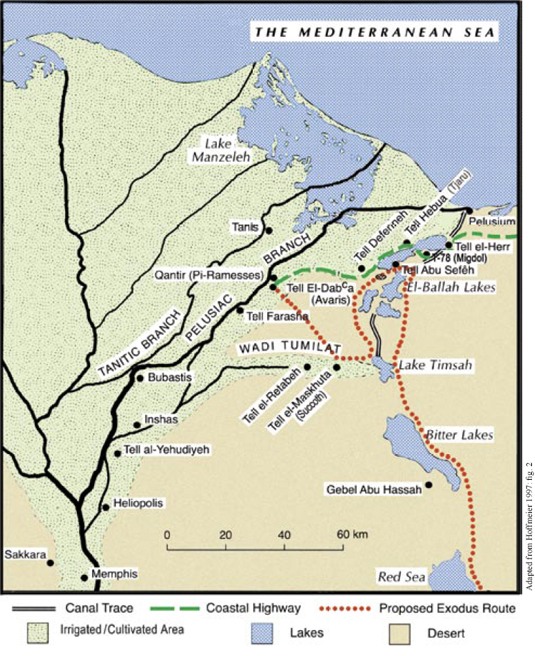 Luke 16 begins with the very puzzling parable of the dishonest steward (16:1-15), then an equally puzzling statement about some taking the kingdom violently (16:16-18) and ends with the story of the rich man and Lazarus (16:19-31) which helps us understand what happens to people when they die.

The steward, about to be fired for either negligence or worse, quickly settles with some debtors for lesser amounts, thus satisfying the master and making friends.  The master (Jesus) then instructs us to be faithful in little things (vv. 10-12) and be careful not to fall in love with money (vv. 13-15) like the Pharisees had.

Jesus pronounces a “new era” in v. 16 and claims that those who enter must do so “forcibly” or “violently.”  “From the days of John the Baptist until now, the kingdom of heaven has been forcefully advancing (Greek biazo, middle or passive), and forceful men (biastes) lay hold (harpazo) of it.” (Matthew 11:12).  A number of Jesus’ teachings about the Kingdom indicate the radical nature of taking hold of the Kingdom. Let us look at a few:

Too often we want the blessings of the Kingdom, but are not willing to do whatever it takes to follow Jesus.

Jesus tells about the rich man and Lazarus and their destinies after this life in 16:19-31.  I don’t believe this is a parable (because in no other parable is someone’s name used), but rather captured a real event.

Now, the point of the story is that the rich man (like the Pharisees) is condemned for loving money and neglecting the poor, but it is interesting to see what Jesus is saying about the afterlife here.

Apparently, when someone dies their bodies go into the ground and their immaterial (soul/spirit) goes to Sheol (Hebrew)/Hades (Greek).  But, there is a division in Sheol/Hades.  Whereas Lazarus goes to Abraham’s bosom and seems to be in comfort (v. 25), the rich man goes to a place of torment (v. 24, “in anguish in this flame”).  And, in Jesus’ words, there is a “great chasm…has been fixed” and “none may cross” (v. 26) so their destinies are sealed.

“The dialogues from the afterlife in this passage reveal a series of vital truths that serve as correctives to some modern erroneous doctrines. (1) There is immediate consciousness after death; therefore soul sleep is not taught in the Bible. (2) Post-death destinies are irreversible; therefore there is no purgatory or second chance of salvation after death. (3) No one can lose or gain salvation after death. The decisions of this life are final and determinative. (4) The judgments that determine the eternal destinies of either torment or blessing are just. (5) Signs should never be sought as a substitute for the Word of God. The Word of God is the only adequate basis for faith (16:29; see Rom. 10:17).”

The bodies of unbelievers will rise before the Great White Throne judgment in Revelation 20:13

While Job 29 focused on Job’s past track record, Job 31 exhibits his continuing innocence and integrity. Here we have proof that Job really was “blameless, upright, fearing God, and turning away from evil” (1:1). Job began by explaining the principles by which he had lived (vv. 1-4).

Most of the 14 sins that Job mentioned in this chapter were not heinous crimes but relatively minor deviations from the ethical ideal. They were covert rather than overt iniquities. Thus Job claimed innocence on the highest level of morality (cf. Matt. 5:27-28).

Having ended his final summation in defense of his innocence, Job rested his case and waited for God’s verdict. This is another climax in the book.

2 Corinthians  deals with Paul’s apostolic authority and his “badge” of apostleship, his sufferings.  Some commentators believe Paul wrote 1 Corinthians after his painful visit and after he wrote the severe letter.  I believe it is more probable that he wrote 1 Corinthians before these two events.  It is very difficult to reconstruct the details of Paul’s activities, since the data available to us is incomplete.

2 Corinthians 1:1-11 speaks to that issue of suffering, telling us that God gives us His comfort so that we can comfort others.  No matter what kind or how bad our sufferings might be, God’s comfort can exceed them.  Paul had experienced a severe testing, nearly dying (vv. 9-10), but God had delivered him.

Philip Edgecombe Hughes, who wrote one of the best commentaries on 2 Corinthians, says…

“This is, indeed, a theme which provides a key to the whole epistle.  Is Paul assailed by anguish of spirit?  It is God who always leads him in triumph in Christ (3:13ff.).  Do we have the treasure of divine glory in earthen vessels?  It is that it may be seen that the exceeding greatness of the power is of God, and not of self (4:7ff.).  Is the Apostle always delivered unto death for Jesus’ sake?  It is that the life also of Jesus may be manifested in his mortal flesh (4:10ff.).  Is the outward man decaying? Yet the inward man is renewed day by day (4:16). . . . The climax is reached in the twelfth chapter where Paul explains how through the endurance of a ‘thorn in the flesh’ he was taught that God’s grace is all-sufficient and that His power is made perfect in weakness (12:7ff.).  This was a principle to which even our Lord submitted in providing our salvation, for He was crucified through weakness, but is alive through the power of God (13:4). It is a theme, therefore, which points to the unity of the epistle, and which in particular links the concluding to the opening chapter.”

Not only had Paul almost died (not good publicity for an apostle), but he had had to miss out on a visit to Corinth, both of which diminished their affections and his authority in their eyes.  Paul points out that he had acted sincerely (vv. 12-14) and consistently (vv. 15-22).  Paul had also acted out of love (1:23-2:4).