While in Midian, Moses takes care of his father-in-law’s sheep, likely learning more about his background from Jethro.  When he is nearly 80, while tending to his flock across the semi-arid desert near “Horeb, the mountain of God” he happened upon a burning bush, which spoke to him.

Below are pictures of the traditional site, the one on the Sinai Peninsula 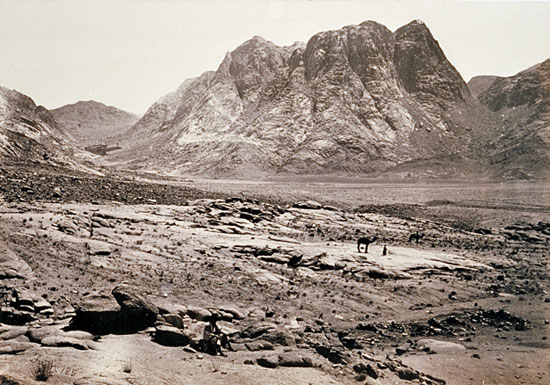 This was the first time that God had revealed Himself to Moses, or anyone else as far as Scripture records, for over 430 years (v. 4).  Later in history, God broke another 400-year long period of prophetic silence, when John the Baptist and Jesus appeared to lead an even more significant “exodus.”

God’s first words was Moses’ name.  The fact that it is repeated twice indicates the urgency of this communication.

God identified himself as “the God of your father, the God of Abraham, the God of Isaac, and the God of Jacob” (v. 6) and Moses rightly hid his face.  God acknowledges that He has seen Israel’s afflictions and heard their cries and was going to deliver them from Egypt to return to the land promised to Abraham (vv. 7-8).

Here is the first instance of calling the land promised to Abraham, the land “flowing with milk and honey.”

Exactly what kind of prosperity does the biblical expression refer to?  It probably does not refer to the most common forms of agriculture, such as the cultivation of grains.  Rather, the “milk” most likely refers to animal husbandry and the use of animal byproducts for food and clothing.  Sheep were important for their wool and meat, but goats may have been more important.  They provide twice as much milk as sheep, and their hair and hides could be used for tents, clothing, carpets, and even satchels for holding liquids.  The “honey” refers to horticulture—the cultivation of fruits and vegetables.  “Honey” in Israel is more commonly the syrup from grapes and dates than the substance produced by bees.

Here’s the catch Moses–YOU are the one to go to Pharaoh and demand that he let my people go (v. 10).  But Moses said, “Not likely, Lord.  I’m not Your man.”  God then promises Moses His presence, which should have been enough (v. 12), but Moses lays a condition down–who do I tell the people you are?  If you are really with me, who are you?

When God revealed Himself to man in the days of the patriarchs it was often associated with a newly revealed name or title for God.

So if Moses were to come to the elders of Israel as a representative of God, it would be logical for them to wonder, “By what name did He reveal Himself to you?”

Here is the covenant name of God, YHWH, which could be translated “I am who I am” or “I will be who I will be.”  It signifies that God is self-existent, eternal, unchanging and sovereign. It is the same concept that Jesus used in His “I am” statements in the Gospel of John.

He is the same God who cut covenants with Abraham, Isaac and Jacob (v. 15).

God instructed Moses to tell this to the elders of Israel, that this same God had seen their afflictions and promised to bring them back to Canaan and take possession of that land.  He told Moses that Pharaoh would not let them go, so God would do mighty wonders and “after that he will let you go” (v. 20) and the people will send you out with favors (vv. 21-22).

Notice that before we even get into the discussion about whether God hardened Pharaoh’s heart or Pharaoh hardened his own heart, God had said back in Genesis 15:13-14 to Abraham…

13 Then the LORD said to him, “Know for certain that for four hundred years your descendants will be strangers in a country not their own and that they will be enslaved and mistreated there. 14 But I will punish the nation they serve as slaves, and afterward they will come out with great possessions.

Luke 6 continues Jesus’ run-ins with the Pharisees (6:1-5).  Leon Morris says of this pericope…

The interesting thing about Jesus’ approach is that He was not simply arguing that repressive regulations should be relaxed and a more liberal attitude adopted: He was saying that His opponents had missed the whole point of this holy day.  Had they understood it they would have seen that deeds of mercy such as His were not merely permitted—they were obligatory (cf. Jn. 7:23f.).

“Any application of the Sabbath Law which operates to the detriment of man is out of harmony with God’s purpose.” (G. Campbell Morgan)

On another Sabbath (Luke 6:6-11) Jesus healed a man and showed that with all the regulations they had placed on Sabbath observance, they had missed the point.

Notice the importance Jesus put on selecting the right men, by praying all night (Luke 6:12).  These were the men who would carry on what He had done, and without them, the work of Jesus would never extend through the whole world. No wonder Jesus gave this an entire night of prayer.

Is the mountainside Jesus went to Mount Arbel?

Mount Arbel is that ridge to the left of Tiberias.  The sermon may have taken place on that higher flat area to the north of Mount Arbel.

Jesus begins his sermon with “upside-down blessings” (6:20-23).  These would sound very strange to their eyes because they would never have imagined that being poor, hungry, sad and hated would be “blessed.”  However, Luke was showing that the kingdom was not just for the rich, well fed, happy and social approved.  It included the “bottom rung” of society.  The opposite side of the coin is expressed through “woes” in vv. 24-26.

A major aspect of Christ’s kingdom is “enemy love.”  It is easy to love the lovable, loving and lovely.  But Christ calls us to love our enemies by blessing them, praying for them and doing them good (6:27-35).  We are always to show mercy (6:36-38).

Jesus then gives two parables, both revolving around seeing.  We must be able to see to lead others, teach others.  And we must get the telephone pole out of our own eye in order to get the splinter out of someone else’s eye.  In other words, examine yourself first, identify your own faults, before you confront someone with theirs.

Christ’s final exhortation is that we cannot afford only to hear Jesus’ words and do nothing about them.  We must obey them, or ultimately disaster will happen and knock us down.  Trials prove us–one way of the other.

Job 20 is Zophar’s second speech.  This speech must have hurt Job more than any that his friends had presented so far. Zophar was brutal in his attack.  He continued the theme of the fate of the wicked that Eliphaz and Bildad had emphasized.  However, whereas Eliphaz stressed the distress of the wicked and Bildad their trapped position, Zophar elaborated on the fact that wicked people lose their wealth (which is exactly what had happened to Job).

the exulting of the wicked is short, and the joy of the godless but for a moment?

Whatever triumphs the wicked man has are short-lived, but ultimately they will experience misery and a dark destiny.

1 Corinthians 7 is Paul’s instruction on singleness and marriage.

First, singleness.  Paul says that singleness is a gift (1 Cor. 7:7), although not everyone has it.  Singles have two advantages that married people don’t have: they are spared the “troubles” of marriage (1 Cor. 7:28) and can devote themselves more fully to God’s work (1 Cor. 7:32-34).  However, Paul also says that singleness can be hard.  They are likely to face a lifelong battle with loneliness and sexual temptation.  Finally, singleness is not necessarily permanent and ultimately we will be married to our Bridegroom.

Now marriage.  Sexual relations are only to be practiced within marriage (1 Cor. 7:2).  This is an obligation of husband and wife (1 Cor. 7:3-4) only to be abstained from

except perhaps by mutual consent and for a time, so that you may devote yourselves to prayer. Then come together again so that Satan will not tempt you because of your lack of self-control (1 Cor. 7:5)

There should be no separation (I believe in the context this means divorce) initiated by wife or husband, even if unequally yoked.  It is possible to reconcile in any situation (1 Cor. 7:10-14).  Paul makes an allowance should an unbelieving spouse leave (1 Cor. 7:15).

20 Each one should remain in the condition in which he was called.

This seems to apply to a person who is single, or married, or divorced.  Paul goes on to provide these hopeful words…

24 So, brothers, in whatever condition each was called, there let him remain with God.

Yet, what if you receive a “new calling”?  This seems to be what Paul is allowing for in v. 28.

28 But if you do marry, you have not sinned, and if a betrothed woman marries, she has not sinned.

If you are married, you must become committed to pleasing your spouse (1 Cor. 7:33).  This is what makes a ministry marriage difficult.

Paul definitely seems to favor singleness and allow marriage, to secure “undivided devotion to the Lord” (v. 35) and greater happiness (v. 40).  So “he who refrains from marriage will do even better” (v. 38).

Paul clearly allows remarriage in the case of the death of a spouse (v. 39).  Whether the abandoned or the one whose spouse committed adultery are allowed to remarry is not clarified.