Now the showdown between Jacob and Esau.  Esau was coming with 400 men (v. 1).  This time Jacob gets out front, bows down…

4 But Esau ran to meet him and embraced him and fell on his neck and kissed him, and they wept.

This is not what Jacob expected.  Esau inquired about Jacob’s family (vv. 6-7) and the purpose for the gifts Jacob had sent ahead (v. 8).  Esau wanted to journey “home” (v. 12), but Jacob begged to go slower.  So Esau returned to Seir, in Edom, while Jacob went to Succoth. 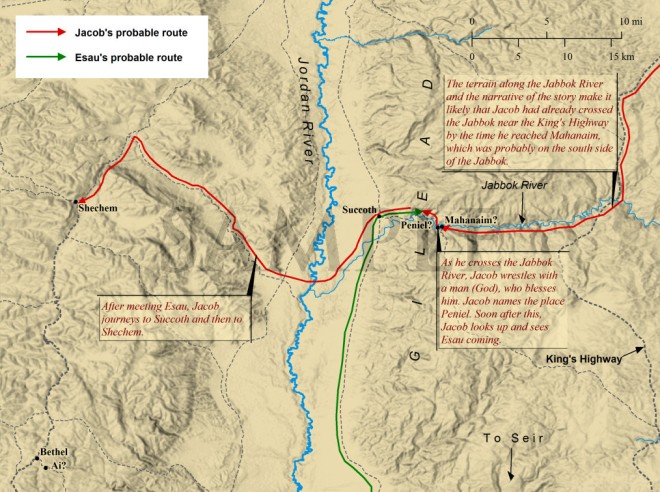 Finally Jacob came to Shechum, back in the promised land.  However, as we will see in the sordid events of Genesis 34, he should have moved on to Bethel or Hebron.

Mark 4 is where Jesus begins to tell parables.  Remember that the purpose of a parable is to give insight to some, but to hide the truth from others (Mark 4:11-12).  So Jesus tells the parable of the sower and the seed, which only finds one good soil.  I’m not sure if this is a discouragement or an encouragement to preachers.  Only 1/4 of the seed I plant will bear fruit, but at least 1/4 will!

Jesus goes deeper into parables and understanding them.  He encourages them (and us) to “pay close attention.”  On the other hand, through the parable of growing seed (vv. 27-29) Jesus seems to be encouraging the sower to sow the seed and then not worry about it.  You don’t have to go dig it up again to see if it’s growing.

Martin Luther said about this text: “After I preach my sermon on Sunday, when I return home, I drink my little glass of Wittenberg beer and I just let the gospel run its course.”  I like that.

Also, in v. 11 Jesus had said that the ones who will understand parables are those who have “been given the secret of the kingdom of God.”  It is something that God gives, a gift.

The parable of the mustard seed (Mark 4:30-32) emphasizes that the kingdom may start out tiny in size, yet grow huge.

from Garden in Delight

After this Jesus took his disciples out on a boat at night on the Sea of Galilee (vv. 35-41).  A storm arose that would have swamped the boat.  Jesus was asleep and seemed not to care.  But when He awoke He stilled the storm with a word.  He is that powerful.

Sometimes when we go through exceeding difficulties, we wonder where Jesus is and whether He cares.  But He is there and He will arise and come to our aid.

Esther 9-10 records the Jews rescue from extermination (by getting the upper hand).

Realize that the uncovering of the plot, the hanging of Haman and his sons, and the second decree, all was meant to discourage the enemies of the Jews from attacking in the first place.

A large number of attackers were killed (nearly 76,000 over all).

Almost twice as many people died in the royal precincts of Susa as in the rest of the city.  The word “capital” in verse 6 really refers to the acropolis, the royal section of the capital city of Susa.

“The Jews were free to strike back without reservation, in retaliation.  But it is clear that they applied self-control. The Jews certainly defended themselves against their enemies, against those who attempted to wipe out their race, but the Jews resisted the temptation to go too far.  They had been given permission to take material advantage of their enemies’ defeat, but they refused to do that.  They held back.  Think of it this way: Not only did the Jews gain mastery over their enemies, they gained mastery over themselves.”

Warren Wiersbe uses a play on words to say, “The tables having been turned, the tables could now be spread.”

Evidently Mordecai issued the decree establishing the Feast of Purim some time after the slaying of the Jews’ enemies (v. 20). His proclamation united the two days on which the Jews had defended themselves (Adar 13 and 14) into one holiday. During the inter-testamental period the Jews called Adar 14 “Mordecai Day” (2 Maccabees 15:36, RSV), but they discarded this special designation later. Modern Jews celebrate Purim on the evening of Adar 14 (in March). It is their most festive and popular holiday. Esther is the only Old Testament book not found among the texts used by the Essene community at Qumran, probably because this community did not observe Purim.

Probably Esther sent her decree (v. 29), confirming Mordecai’s previous declaration of the official Jewish holiday (vv. 20-21), to encourage its firm establishment. Her letter evidently began, “Words of peace and truth” (v. 30).  There was likely considerable resistance within the conservative Jewish community to adding another national festival to those prescribed in the Torah.

The book ends by speaking of the exaltation of Mordecai in position and influence within the Persian empire.

It is quite possible that God’s name is left out of the book of Esther because neither Esther nor Mordecai were particularly religious Jews.  Yet, it still shows God’s determination to preserve His people, even when they were disobedient.

As Karen Jobes writes, “Beneath the surface of even seemingly insignificant human decisions and events, an unseen and uncontrollable power is at work that can be neither explained nor thwarted.”

Abraham was the most important forefather of Israel.  Paul began this chapter by showing that God declared Abraham righteous not because of works, but because of the Abraham’s faith.

Romans 4:4-5 contrast faith and works.  Work yields wages that the person working deserves. Faith receives a gift (Romans 4:4; lit. grace, Gr. charin) that the person believing does not deserve. Incredibly, God justifies those who not only fail to deserve justification but deserve condemnation because they are “ungodly” (NASB) or “wicked” (NIV Romans 4:5; cf. Romans 3:24). This is how far God”s grace goes (cf. Deut. 25:1)!

Not only Abraham, but David’s experience illustrates justification by faith as well (vv. 6-8).  The issue, to the Jews, was circumcision.  Was it necessary to be circumcised to be justified?  Paul says no, Abraham believed and was justified even before he was circumcised (vv. 9-11), which is true not only of Abraham but all who follow his example and believe (v. 12).

No one is able to keep the law, so it’s a good things we aren’t justified by keeping the law (vv. 13-15).  And justification does not come from being a physical descendant of Abraham, but rather comes to those who imitate his faith (vv. 16-17).

I believe that it is our faith in God, more than anything else, which gives God glory.  My worship, my love, my service, my contributions, my mission trips–all those are things that I do for Him.  But I trust Him to do something for me, and that glorifies Him more.

I believe v. 21 gives the best definition of faith…

21 fully convinced that God was able to do what he had promised.

Faith looks to the promise and the power of God.  Faith can have many levels of strength, but the strongest faith is “fully convinced.”

The remaining verses (vv. 22-25) apply Abraham’s example again to the issue of justification.