In Genesis 27 Jacob tricks Isaac and Esau gets a lesser blessing.  Isaac apparently “lives to eat,” as expressed in v. 9, “delicious food for your father such as he loves” and v. 14 “his mother prepared delicious food such as his father loved.”  That is probably an inordinate (abnormal) love, such that made Isaac favor Esau.  It blinded him from seeing Esau’s own weakness for food back in Gen. 25:29-34.

So Isaac was not merely physically blind.  And this is what has always puzzled me–why could he not tell it was Jacob rather than Esau?  The answer is that Isaac was also spiritually blind to Esau’s faults.

Robert Gonzales also points out that Isaac’s own love for food and favoritism towards Esau, required that he confer the blessing “in secret,” instead of in front of the whole family (Genesis 49).  When we have an idol, we hide our behaviors.

Did Isaac know that Yahweh “love Jacob but hated Esau”?  Was he ignorant of what he should have known, or was he purposefully going against God?  Either way, he was in dangerous territory.

While this doesn’t excuse Jacob and Rebekah’s sin, it does show that God will get His way, even through the sins of people.  Maybe Isaac eventually bowed to this, for when Esau did come in, Isaac didn’t revoke Jacob’s blessing, but gave Esau another, lesser blessing.

As a result of all of this, Esau hated Jacob and would have killed him if Rebekah had not sent him away to Haran.

I got this chart from Cheri Gregory on the internet… 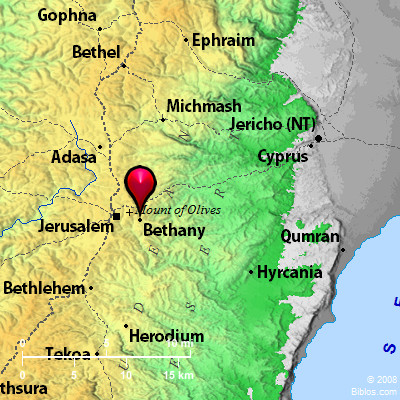 Jesus was in Bethany in the house of Simon (v. 5) and was anointed (vv. 6-13).  Most believe this is the same event as in John 12, so it was the Saturday before the crucifixion.

John recorded that Lazarus was there, his sister Martha helped with the serving, and their sister Mary was the woman who broke the vial and anointed Jesus’ head (and feet, John 12:2-3).  Perhaps Matthew did not mention them by name in order to keep Jesus central in his story. John further recorded that the pound of perfume cost 300 denarii, about one year’s wages for a working man (John 12:3, 5).  Matthew and Mark just said it was “very” expensive (“costly”).

That was a big issue for Judas who saw this as a waste (v. 8).  Apparently it was the tipping point for him, for he went to the chief priests to see what he could get as his “severance pay” (vv. 14-16).  He needed his “golden parachute” because he could see that this venture was going nowhere.  The “30 pieces of silver” they agreed to pay Judas was a paltry sum (in contrast to the “high price” at which Mary evaluated Jesus, v. 9), and fulfilled Zechariah 11:12.  The amount constituted a month’s wages, if the silver pieces were denarii, which seems likely.

Jesus gave directions to prepare for Passover (vv. 17-19), then celebrated Passover with His disciples (vv. 20-29), after the betrayer left (vv. 21-25).  So Judas was not there went they celebrated “the Lord’s Supper.”

Afterward they went out to the Mount of Olives (v. 30), where Jesus predicted Peter’s betrayal (vv. 31-35) and then asked them to watch and pray with Him (vv. 36-45).  Of course, they could not stay awake as Jesus faced his “dark night of the soul.”  Faced with alienation from the Father, He asked that the “cup be passed” from Him (v. 39).  But at every step, Jesus was willing to submit to the Father’s will.

five reasons the father silently said ‘no’ to the son in gethsemane, thabiti anyabwile

the agony of gethsemane__the most amazing and terrifying scene in the bible, nathan cherry

Then, the soldiers, with Judas, came to arrest Jesus (vv. 40-56) and brought him to Caiaphas, the officiating high priest (v. 57).

This is a model of Caiaphas’s house

This is the first of six trials of Jesus.  There are so many abrogations of the law in these trials. 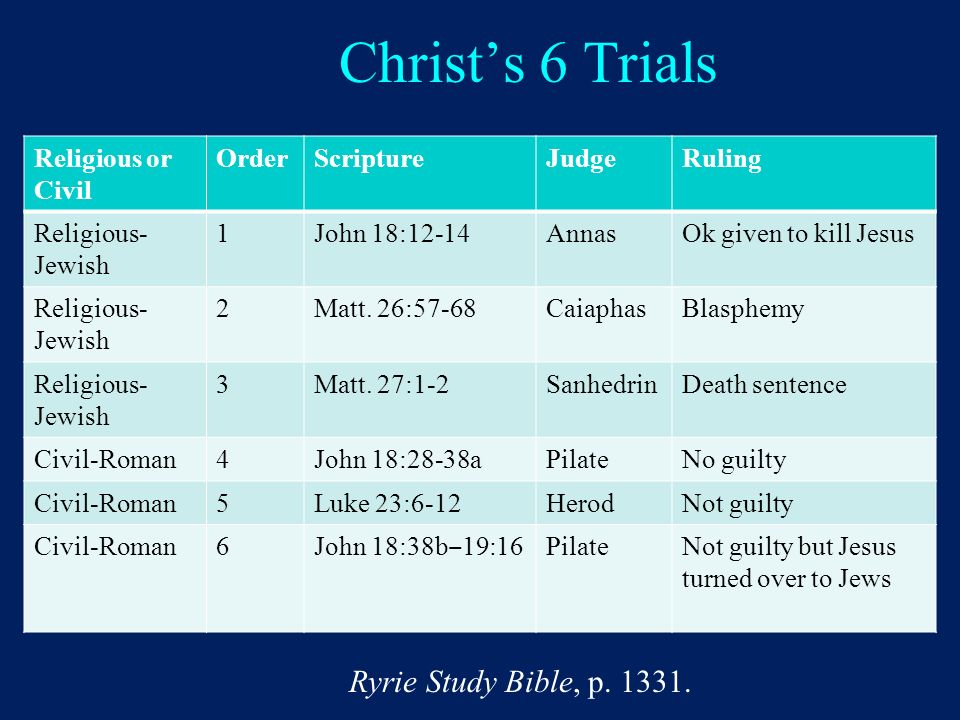 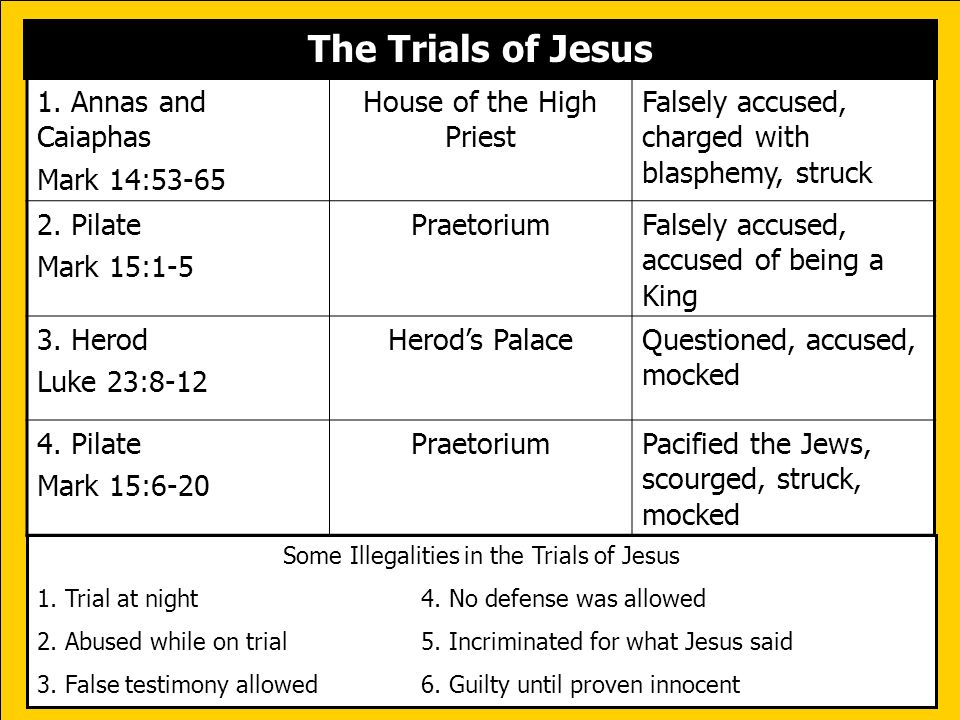 These are just the four trials that occur in the Gospel of Mark, but they highlight some of the illegalities.

Matthew stressed Jesus’ righteousness for his readers by highlighting the injustice of His trials.

58 And Peter was following him at a distance (and that was the problem).

The lawyers had to interview several people (“false witnesses”) before they finally found “two” of them that would agree on a charge against Jesus.  This was another way that Matthew stressed Jesus’ innocence. Interpreting with wooden literalism, one might take Jesus’ words as a threat to desecrate the temple, but Jesus had spoken metaphorically (John 2:19-21).  He had meant that He was the true temple, the place where people met God and where God met them.  Most ancient Near Eastern people regarded the desecration of a temple as a capital offense, and the Jews shared this viewpoint (cf. Jer. 26:1-19).  Jesus had not, as far as the Gospel records go, said that He would or could destroy the temple.  He had said, “[You] destroy the temple . . . Nor had He said that He would rebuild the Jerusalem temple. (Thomas Constable)

if it could happen to peter… (matthew 26), nicholas batzig

The solution, however, is not difficult to see.  In John 18:5 Peter makes his first denial of the night at the house of Annas during Jesus’ first Jewish hearing.  Then he follows the crowd with Jesus over to the house of Caiaphas where Peter makes his further denials during the second Jewish hearing (Matt 26:69–75; Mark 14:66–72; Luke 22:55–65; John 18:25–27).  So where did Peter deny Jesus?  First, right outside the doorway of Annas’ house and then sitting in the courtyard of Caiaphas’ house while warming himself by a fire.

Model of a house excavated from the ruins of 1st century Jerusalem. It may have belonged to Annas.
If so, Jesus was questioned in one of the small side-rooms or in a corner of the courtyard.

In Esther 3:1 Haman gets promoted.  He is an Agagite, a long line of Jew haters.

Haman was proud, egotistical and spiteful.  He had all the God-hated characteristics of Proverbs 6:16-19.

Mordecai angers Haman by refusing to bow down to him (3:2), which infuriated Haman and causes him to overreach in seeking to eliminate the Jews altogether.  (It is possible that he could have successfully executed Mordecai, but he wants to do more!)

His pride wounded, Haman made a proposal to exterminate the Jews.  (Neither the king nor Haman knew that Esther was a Jew.)

He cast lots to determine the day most favorable for wiping out the Jews.  This was like reading his horoscope.  However, God controls the cast of the die (Prov. 16:33).  A day is set far enough in advance to allow the Jews to prepare to defend themselves.

Haman makes a request to the king to exterminate a people group (doesn’t mention the Jews by name) and contribute 10,000 talents of silver to the king’s treasury (possibly attained by looting the massacred people).  Vv. 8-9

In 3:10-15 the king gives permission and signs it with his seal, making it inviolable.

Swindoll drew three lessons from this section of the book:

18 to open their eyes, so that they may turn from darkness to light and from the power of Satan to God, that they may receive forgiveness of sins and a place among those who are sanctified by faith in me’ [Jesus].

A conference among the three of them determined that Paul had done nothing wrong, and could have been set free had he not appealed to Rome (vv. 30-32).  Thomas Constable says…

Luke implied that everyone present concurred that Paul was completely innocent.  This had previously been the verdict of the Pharisees (23:9), Claudius Lysias (23:29), and Festus (25:25).  Now Agrippa, a Roman ruler with Jewish blood in his veins who was sympathetic to the Jews, voiced the same opinion (v. 32).  In Agrippa’s opinion, Paul did not even need to be in prison, much less die for what he had done.

Now Paul is headed for Rome!  What a ride he will have!