The first 16 verses of Genesis 23 recounts Abraham bargaining for a burial plot for Sarah.  He wanted to pay for it, they wanted to give it to him.  Usually, people wanted to bury their loved ones in their homeland.  Abraham was indicating that he intended to stay in the land God gave to him.

Why did “Ephron” want to sell Abraham the entire plot of ground (“field”) in which the cave lay, rather than just the “cave” as Abraham requested (vv. 8-11)?

Hittite law specified that when a landowner sold only part of his property to someone else, the original owner had to continue to pay all taxes on the land.  However, if he sold the entire tract, the new owner was responsible to pay the taxes (cf. 1 Chron. 21:24).  Consequently, Ephron held out for the entire tract, knowing that Abraham needed to make his purchase quickly so he could bury Sarah.

Abraham’s willingness to pay, what appears to have been an unusually large price for the land, further demonstrates his faith (vv. 15-16).  An average field cost four shekels per acre, and garden land cost 40 shekels per acre.  Abraham was willing to pay “400 shekels”!  Of course, the text does not give the exact area of the property, but it appears to have been relatively small.

So Abraham buried Sarah there:

19 After this, Abraham buried Sarah his wife in the cave of the field of Machpelah east of Mamre (that is, Hebron) in the land of Canaan 20 The field and the cave that is in it were made over to Abraham as property for a burying place by the Hittites. 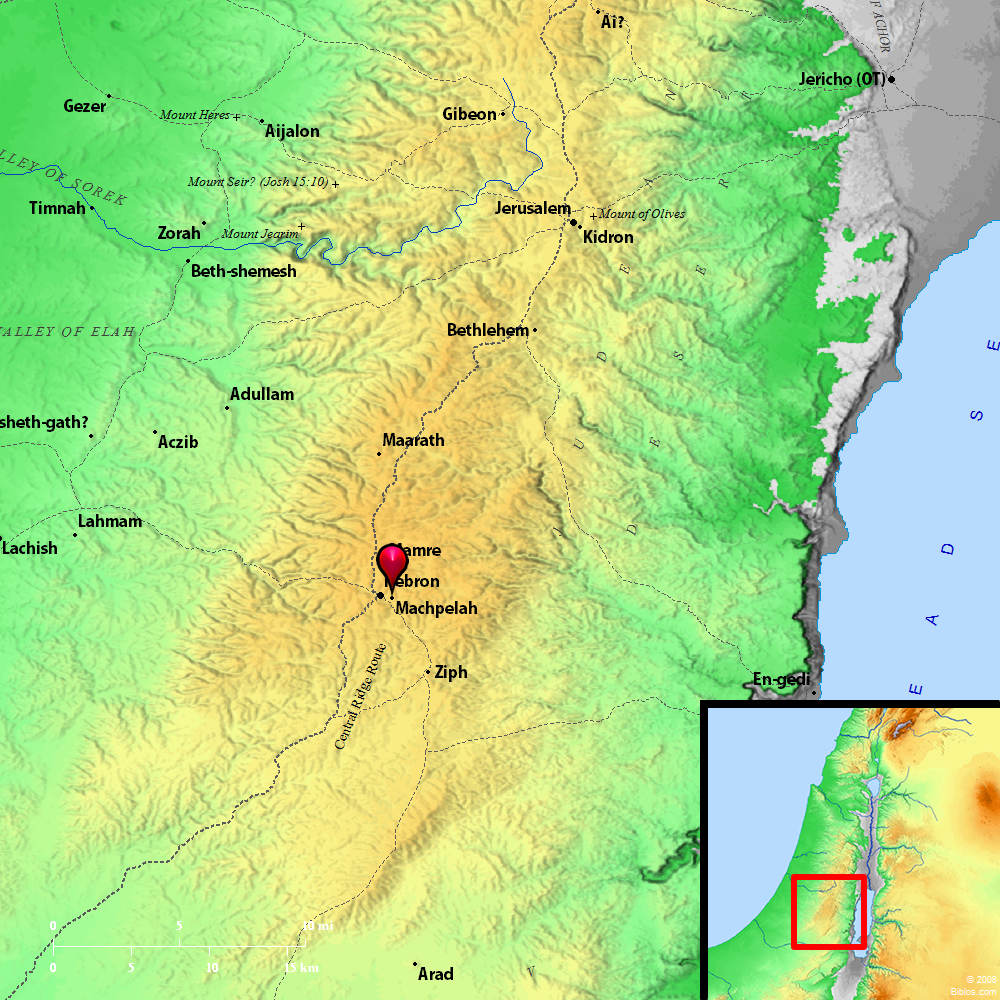 Matthew 22 begins with a parable of the wedding feast.

The three parables in this series are similar to three concentric circles in their scope.  The scope of the parable of the two sons encompassed Israel’s leaders (21:28-32).  The parable of the wicked tenant farmers exposed the leaders’ lack of responsibility, and their guilt, to the people listening in, as well as to the leaders themselves (21:33-46).  This last parable is the broadest of the three. It condemned the contempt with which Israel as a whole had treated God’s grace to her. (Thomas Constable)

The prophets announced the coming of the banquet and urged those whom God invited to it, the Jews, to prepare for it.  However, most of those who heard about it did not respond to the call to prepare for it.  The repetition of his invitation (vv. 4-5) displays his grace.  Some (read religious leaders) abused his servants (vv. 6-7).  Servants were sent out again, inviting “good” (Jews) and “evil” (Gentiles) until the hall was full (vv. 8-10).

So, who is the man who doesn’t possess wedding (clean) clothes?  A Jew who hoped to enter the kingdom based on his Jewishness?  A believer who had lost his salvation because of lack of righteousness in his life?  Or is it a believer who loses reward?

Well, since a true believer cannot lose their salvation and “weeping and gnashing of teeth” usually refers to hell, I would go with the first explanation.  Jesus was looking for faith and did not see it.

30 For in the resurrection they neither marry nor are given in marriage, but are like angels in heaven.

Jesus did not say that in the resurrection state, all memory of our former existence and relationships will end.  This is a conclusion some interpreters have drawn without warrant.  We will know who our husband or wife was.

Does “neither marry nor are given in marriage” mean only that there will be no new marriages in heaven?

Given the fact that Jesus is facing the question of exclusivity in marriage (which is definitely true now), I like what D. A. Carson says…

Neither did He say that we will become angels. We will not. We will be like the angels.

Does Our Marriage to Christ in Heaven Mean Our Earthly Marriage Partners Won’t Be Important to Us? by Randy Alcorn

Matrimony No More, Why the End of Marriage in Eternity is Good News, by John Piper

The next challenge (vv. 35-40) was “which is the great commandment in the Law?”  He might have been looking for Jesus to pick one out of 613 laws, which would undoubtedly spark an argument.  Instead, Jesus summarized the law in two commands–love God and love man.

Jesus sprang the last conundrum on them (vv. 41-46) with the question

“What do you think about the Christ [the Messiah]? Whose son is he?”

Jesus had previously asked His disciples a similar question about His identity (16:13, 15). Peter, speaking for the disciples, had given the proper full answer (16:16).  That response led to commendation (16:17-21).  The Pharisees’ improper response here led to condemnation (ch. 23). Everything hinges on one’s view of Jesus.

From their history and Scriptures they replied, “The Son of David.”

Jesus pointed out that the Pharisees’ answer contained a problem.  “How” could Messiah be David’s “son” if “David” called Him his “Lord”?  Jesus referred to Psalm 110, the most frequently quoted Old Testament chapter in the New Testament.  This was a psalm that David wrote, as is clear from the superscription.

Jesus regarded it as He regarded all the Old Testament, namely, inspired by the Holy Spirit (v. 43; cf. Acts 4:25; Heb. 3:7; 9:8; 10:15; 1 Pet. 1:21).  Jesus assumed that Psalm 110 was Davidic and Messianic, and the Pharisees agreed.  He referred to the psalm’s inspiration here to reinforce its correctness in the minds of His hearers.  David had not made a mistake when he wrote this.

There is good evidence that almost all Jews in Jesus’ day regarded Psalm 110 as messianic.  Jesus’ point was that Messiah was not just David’s descendant, but He was God’s Son also.  This is a point that Matthew stressed throughout his Gospel (chs. 1—2; 3:17; 8:20; 17:5; et al.).  Jesus was bringing together the concepts that Messiah was the human son of David and the divine Son of God. (Thomas Constable)

With that, the religious leaders shut up.  They were bested, just like Satan left after Jesus bested him (Matthew 4:1-11).

Verse 46 finishes off this entire sub-section of the Gospel (21:23—22:46).  Israel had rejected her King.  Jesus had predicted this rejection (21:18-22).  It resulted from the series of confrontations with Israel’s leaders that happened on a single Wednesday in the temple courtyard.  Now the King would formally reject the nation, but not permanently in view of the promises to the patriarchs.

Nehemiah 12 actually continues what began in Nehemiah 11, the re-settling of some of the people into Jerusalem.  Then, in 12:27-47 we have the dedication of the wall.

This portion of the book resumes the historical narrative in chronological order from 11:2 where it stopped.  Probably the dedication took place soon after the covenant renewal ceremonies (chs. 8—10). 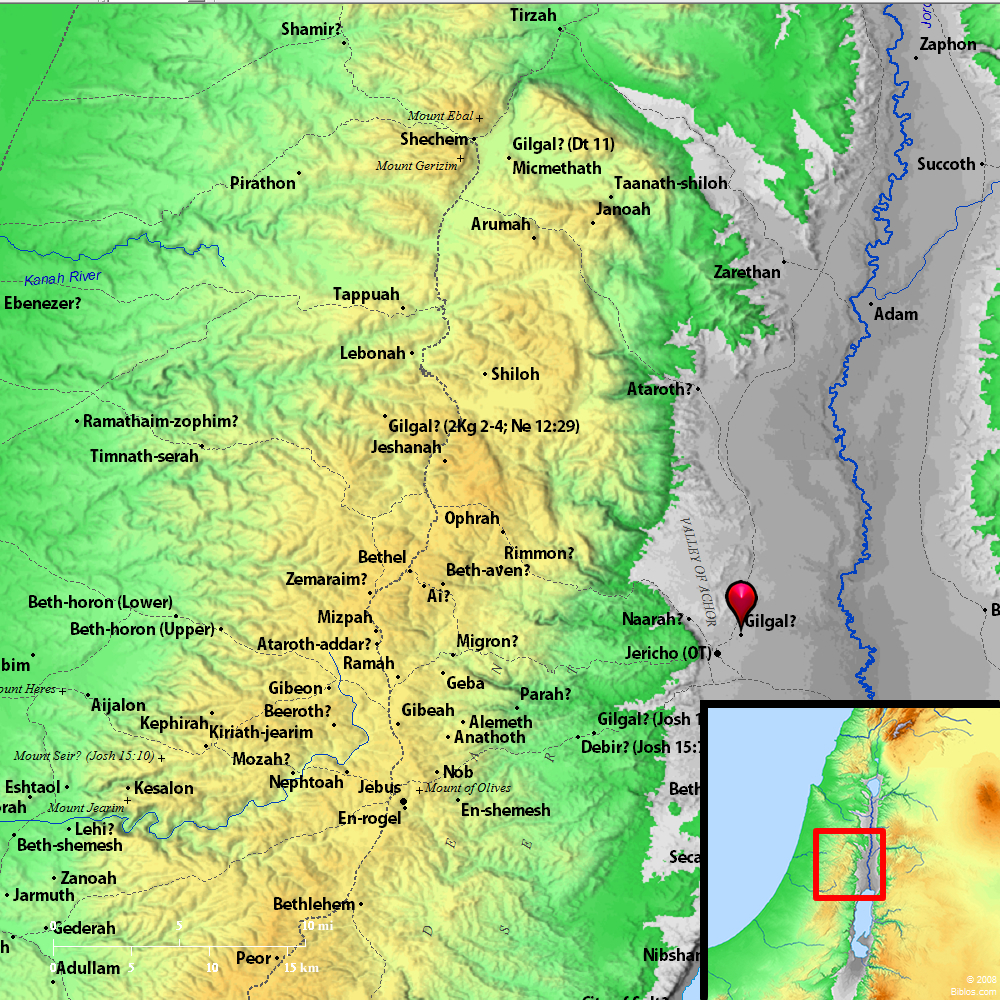 You can see Nephtoah and Geba (vv. 28-29) on the map above.  Notice that there are three Gilgals.  On this map Jerusalem is called Jebus (its name until David conquered it).  Beth-Azmaveth is just north of Anathoth.

One large choir mounted the city wall and walked around it counterclockwise, evidently beginning at the Valley Gate (vv. 31-37).  Appropriately, this was the gate from which Nehemiah had set out on his initial inspection of the wall (cf. 2:13).

Another choir mounted the wall, probably at the same place, and proceeded in a clockwise direction (vv. 38-39). Both groups appear to have sung as they walked (v. 42).

They met at the temple (vv. 40-42).  There the priests offered many sacrifices and the people rejoiced greatly (v. 43). 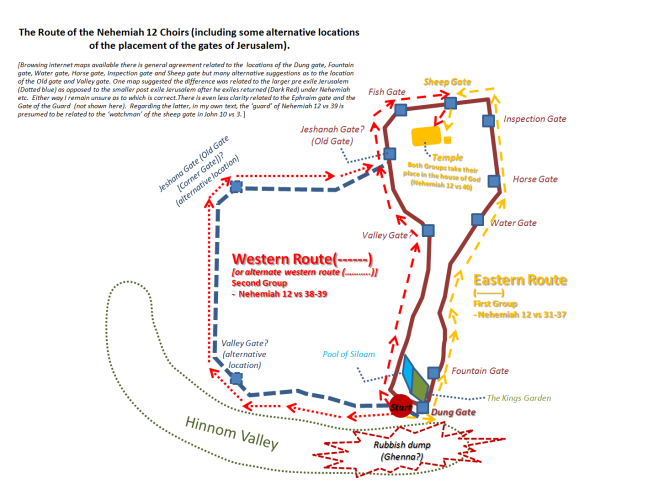 This was the same wall that Tobiah had earlier claimed would be so weak that even a fox walking on it would break it down (4:3)!

“The final consummation of Nehemiah’s work had been reached.  The city was protected by a wall and could resist any attempt of the neighboring nations to attack it.  This was one of the main reasons for the joy.  The other was that the people had demonstrated that they could perform a major task as a unit, and this proved to be a great stimulus to their morale.”

Acts 22:1-21 is Paul’s address to the Jews, while 22:22-30 is the violent reaction, Paul’s near-flogging and the summoning of the chief priests and all the council to examine Paul.

In this first of Paul’s five defenses, Luke’s apologetic interests come to the fore in highlighting the nonpolitical character of Christianity (contrary to other messianic movements of the day, cf. 21:38) and in presenting Paul’s mandate to the Gentiles as being the major reason for Jewish opposition to the gospel (cf. 22:10-22).

Paul needed to defend himself against the charge that he had been disloyal to his people, the Mosaic Law, and the temple (cf. 21:28).  His devout Jewish audience was especially skeptical of Paul since he was a Hellenistic Jew who fraternized with Gentiles.  This is an excellent example of the Holy Spirit giving the Lord’s servant the words to say on the spur of the moment, as Jesus had promised He would do (Matt. 10:16-20; Mark 13:9-11).

Jews had taken messages from God to Gentiles many times in Israel’s past (e.g., Jonah; the Pharisees, Matt. 23:15; et al.).  That revelation could not have been what infuriated Paul’s audience.  What upset them was that Paul was approaching Gentiles directly about the Messiah—without first introducing them to Judaism and its institutions.  This was equivalent to placing Gentiles on the same footing before God as Jews, and this was the height of apostasy to the traditional Jewish mind.  This is why Paul’s hearers reacted so violently and allowed him to say no more.