Hosea and Zechariah, which may appear longer than Daniel, because they have 14 chapters each, compared with Daniel’s 12, are really shorter than Daniel.  Hosea has 197 verses, and Zechariah has 211, whereas Daniel has 357.

The Minor Prophets do not occur in chronological order.

All of the prophets call Israel back to the covenants.  God had promised in a covenant to Abraham that he would give Abraham land, descendants and a blessing.  That covenant is spelled out in more detail in the Palestinian covenant in Leviticus 26 and Deuteronomy 28-32, the Davidic covenant in 2 Samuel 7 and the new covenant in Ezekiel 26.

The Mosaic covenant then formed the stipulations for Israel living in the land and being blessed in it.  Thus, Hosea frequently refers back to the Pentateuch, the first five books of the Bible, which formed the foundation of Israel’s relationship with God.

God had predicted, however, in Leviticus and Deuteronomy that Israel would fail to keep the covenant, would suffer many judgments from God, and would eventually be exiled.  But while in exile God would lead them to repentance and bring them back into the land.

Hosea was a prophet to Israel.  That might seem obvious, but what specifically does that mean?

Throughout the book of Hosea, the northern ten tribes are called Israel or Ephraim, the largest of those ten tribes.  The southern kingdom is called Judah.

After the establishment of two short-lived capitals at Shechem and Tirzah, King Omri established his capital at Samaria, where it would remain for the duration of the northern kingdom’s existence.

The kingdom of Israel was larger in size and controlled more significant trade routes than did Judah.  Territorial boundaries expanded and contracted over time as Israel and Judah engaged in conflict with one another and their neighbors.  Evidence from outside the Bible suggests that Israel was more powerful than Judah.

This was especially true under the reign of Jeroboam II for forty years from 793 to 753 B.C.  His reign, during a time of Assyrian weakness, made Israel strong and prosperous.  Of course, in their material prosperity they became spiritually weak.  The predominant religion of the northern kingdom at this time was the worship of Baal, a Canaanite god of fertility.

In Hosea 1:4, Hosea prophesies that the Lord will punish the house of Jehu for the bloodshed of Jezreel.  Jehu had taken the throne through assassination. Jeroboam II was Jehu’s great grandson.  Jeroboam II would be succeeded by his son Zechariah who would reign only six months before ending the line of Jehu.  Jeroboam II died in 743 B.C. and the fall of Samaria and the northern kingdom would happen only 21 years later in 722 B.C.

After Jeroboam II, a series of six very weak and wicked kings ruled in Israel, while Uzziah, Jotham, Ahaz and Hezekiah reigned in Judah.  None of the kings of Israel followed the Lord, while only Ahaz was a bad king in Judah.

Israel lived off of the stability and prosperity of Jeroboam II’s rule for a number of years, but good times don’t necessarily produce good people.  In fact, it is often just the opposite—good times produce very self-centered people.

Although they had been blessed by God, they turn to idols and treaties with other nations to help them in their times of trouble.  They “break faith” with God, like adulterous prostitutes.

Due to the current prosperity, however, Hosea’s warnings would fall upon deaf ears.

From the ESV Study Bible:

The latter days of the eighth century B.C. witnessed the rise of the neo-Assyrian king Tiglath-pileser III (745–727).  He was followed by several capable kings who extended Assyrian dominance over the entire ancient Near East (eventually including Egypt) for more than a century.  Particularly relevant to Hosea were at least six incursions into Palestine and its neighbors by an unstoppable Assyrian army during the prophet’s lifetime.

This coincided with political upheaval and instability during the period of the six Israelite kings who reigned within a period of thirty years, filled with intrigue and violence.

Zechariah (753 B.C.) was murdered after only six months in power.  The usurper, Shallum, was assassinated one month later.  The next king, Menahem (752–742 B.C.) survived for a decade only by paying a burdensome tribute to Tiglath-pileser.  His son, Pekahiah (742–740 B.C.), was assassinated by an army officer, Pekah (740–732), after only two years’ reign.  Subsequently, Pekah was disposed of by Hoshea, whose rebellion against the Assyrians led to the end of the northern kingdom (732–722 B.C.).

The Assyrians conquered and captured Israel in 722 B.C., so Hosea’s ministry extended right up to that time.  For historical background read 2 Kings 15 and 17 for Israel’s kings, and 2 Kings 15-20 for Judah’s kings who reigned during Hosea’s years of prophetic ministry.

Israel was destroyed by the Assyrians in 722 B.C.E., whereas Judah, though severely damaged, narrowly escaped the dreadful onslaught of the Assyrian war machine.  But Judah’s escape from imperial domination would be brief. Jerusalem eventually fell to the Babylonian Empire and was destroyed in 586 B.C.  So the southern kingdom lasted another 150 years. 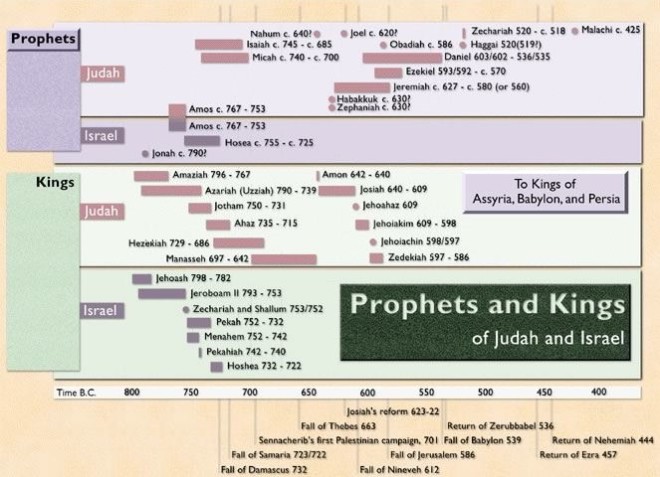 So Hosea wrote during a time of unparalleled prosperity in Israel, but also a time of spiritual decline.  It sounds like our country today, doesn’t it?

The ESV Study Bible describes the theme of Hosea as Israel’s unfaithfulness to a faithful God.  Adulterous Israel will be punished, but can return to Jehovah because of His steadfast love.

Hosea depicts Israel’s unfaithfulness with a number of images from family and nature.  Israel is like: a promiscuous wife, an indifferent mother, an illegitimate child, an ungrateful son, a stubborn heifer, a silly dove, a luxuriant vine, and grapes in the wilderness.  Yet Israel’s unfaithfulness and obstinacy are not enough to exhaust God’s redeeming love that outstrips the human capacity to comprehend.

Hosea’s major concern was Israel’s worship of Baal—a weather-god worshiped in Syria and Palestine, who had control over agriculture and fertility, rainfall and productivity.  Since Israel was an agricultural society, Baal worship was very important.

Baal was localized at different shrines identified by such names as Baal-peor (9:10) and Baal-gad (Josh. 11:17) and hence was sometimes referred to as the Baals (Judg. 2:11; 3:7; 8:33).  I will not attempt to give a full description of this false religion here, but one major aspect of Baalism touches on this prophet’s message: the religion’s appeal to human sexuality (cf. Isa. 57:3–10).  Other aspects—such as drunkenness, bestiality, human sacrifice, mutilations, and incest—may be discerned in the book, but Hosea understands the strength of Baalism’s appeal to the sex drive by way of ritual prostitution.

As with many religions in the ancient near East and the Mediterranean region, the pagan shrines promoted sexual immorality as an act of appeal to Baal to act accordingly—to grant fertility to women and rain for good crops.  This took place through cult prostitutes (Hosea 4:14).

Since Israel had a covenanted relationship with Yahweh, the God of Israel, they were not to fraternize with other gods.  A dominant theme of this book is that Israel is Yahweh’s bride.

Other Old Testament prophets speak of this bride and groom relationship between Israel and Yahweh, although Hosea was the first.

For example, Isaiah begins in chapter 1 decrying “A faithful city has become a whore” (1:21), but then end anticipates the time when Israel will be as a “bride” in whom the Lord “will take delight” (62:4-5).  She moves from harlotry to holiness, from whore to bride.

The purpose of this image is to help us understand the  betrayal of Israel’s sin and why God was just in judging Israel.  It also relates to the message of hope, that Yahweh would stay committed to his people and one day restore her to himself.

Ezekiel 14:12-16:63 is the story of an unfaithful wife, taken by God when no one else wanted her, treated with great compassion and kindness, yet again turning to other gods.

This book of Hosea is designed to jolt the reader, to make them experience the betrayal and treachery God feels.  “It is as startling in its presentation of sin as it is surprising in its stubborn certainty of grace” (Duane Garrett, Hosea-Joel, p. 22)

From the ESV Study Bible:

Worship of Baal is not just a violation of the first of the Ten Commandments (Ex. 20:3), it is a betrayal of that intimate and endearing union that God made with his people.  Idolatry, therefore, is depicted as spiritual adultery, transgression against the marriage between the Lord and Israel (cf. Ex. 34:11–16; Lev. 17:7; 20:4–6; Deut. 31:16).  The prophet justifies the Lord’s coming judgments with a litany of offenses that amount to the radical ingratitude of a wayward wife.  But punishment is not ultimately what the Lord wants for his people; he desires that they leave their fornication and return to the One who first loved them and can indeed provide what is for their best.

So this relationship between Yahweh and Israel was a special relationship.  God had chosen Israel to be his bride, his wife, out of all the nations.  It was an exalted status, one which Israel despised through their actions.

Hosea experienced the tragedy and heartbreak of an unfaithful wife, not just an adulteress, which is bad enough, but an adulteress turned prostitute—which enabled him to enter into the fellowship of God’s sufferings over the behavior of His “wife,” Israel.

Hosea’s heart was broken, and he felt the most unutterable sorrow that a man can feel, when he feels his wife abandon him.  He learned how God felt, and he denounced kings, priests, and people out of that broken heart that mirrored the broken heart of God.  Hosea is the prophet of the broken heart and the broken home (John Phillips, Exploring the Old Testament Book by Book, p. 317).

Hosea, then, revealed the deepest nature of sin, namely: infidelity to the elective grace of God.  The worst thing in the realm of sin is apathy to the love of God.  The opposite of love is not hate but apathy.

We will dive into the details of Hosea’s life and prophesies beginning next week, but for now let me just give you an overview of the book.

Hosea is divided into two major parts.  The first three chapters contain a living parable as Hosea is told to go and marry a wife of harlotry – a prostitute.  He has children by her and then she is unfaithful to the marriage.  This relationship illustrates the similar unfaithfulness of Israel in her relationship with the Lord.

The remainder of the book consists of a large circuit that begins and ends with a Covenant Lawsuit. Both at the outset and at the close of this section the Covenant is specifically mentioned (Hosea 6:1, 7 with Hosea 12:1).

The outstanding revelation concerning God that this book contributes is the loyal love of Yahweh for His own.  Thus, commentators have noted…

“In no prophet is the love of God more clearly demarcated and illustrated than in Hosea.”

“Every page of the prophecy keeps declaring God’s love for Israel.”

There are five series of judgment and restoration throughout the book, and we will look at the first one next week.

You can listen to Grace Still Amazes on KENA at 7:45 a.m. on Sundays and Saturday at 7 a.m., Sunday at 8 a.m., and starting Sunday January 6, 2018 will also air at 11:45am on Sundays on KAWX.  Often this posting will be longer and include more material than the radio broadcast, which is 15 minutes.